ISIS building a "terror army" in Europe? - The Horn News 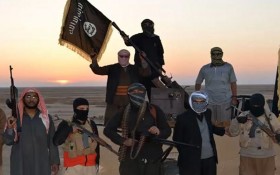 As Europe struggles to deal with a ballooning refugee crisis, intelligence officials are increasingly warning that many migrants are not who they claim to be.

According to the latest reports from Germany, officials say almost a third of all asylum seekers arriving in the country who claim to be Syrian are hiding their true identities. There have already been claims from ISIS militants that as many as 4,000 ISIS fighters have been snuck into Europe among the refugees.

Hundreds of thousands of people have come to Germany since the start of the year seeking refuge from war. Tobias Plate, a spokesman for Germany’s interior ministry, said Friday that it’s estimated that “30 percent of asylum seekers claiming to be Syrian in the end aren’t Syrian.”

According to a recent United Nations report on the migrant crisis, 69% of all these refugees are males, most at or near fighting age.

U.S. lawmakers have expressed growing concerns about the potential influx.

The Islamic State group and other terrorist organizations “have made it abundantly clear that they will use the refugee crisis to try to enter the United States. Now the Obama administration wants to bring in an additional 10,000 Syrians without a concrete and foolproof plan to ensure that terrorists won’t be able to enter the country,” said U.S. Sen. Chuck Grassley, R-Iowa, and U.S. Rep. Bob Goodlatte, R-Va.

“The administration has essentially given the American people a ‘trust me.’ That isn’t good enough,” according to a statement from the lawmakers, who head the congressional judiciary committees.

Intelligence officials and Republican lawmakers have expressed concerns that Islamic State militants could seek to slip into Europe or the U.S. posing as migrants.

In 2011, two Kentucky residents who had been resettled as Iraqi refugees were accused of being al-Qaeda members. They were convicted of terrorism charges after their fingerprints were linked to roadside bombs in Iraq. That led to new steps to screen refugees, a process that has been criticized as slow and bureaucratic.

“Some of the 65,000 that came from Iraq actually were trying to buy stinger missiles in my hometown in Kentucky,” said U.S. Sen. Rand Paul of Kentucky, a Republican presidential candidate, in a broadcast interview. “So we do have to be wary of some of the threat that comes from mass migration.”