Is Trump right about Cruz’s citizenship? - The Horn News 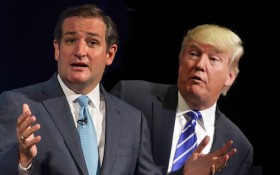 For weeks now GOP presidential hopeful Donald Trump has been making accusations that Texas Sen. Ted Cruz may not be eligible to be president.

And while Trump admitted in last night’s Republican debate that the attacks are at least somewhat politically motivated, one particular part of his argument seems to have merit.

The issue is almost certainly headed to court.

Trump drew loud boos at yesterday’s debate when the issue of whether Cruz is a “natural-born citizen” was raised by moderators. According to the Constitution, being a natural-born citizen is a requirement to serve as president, and Cruz was born in Canada to an American mother and Cuban father.

Some arguments have been made that Cruz’s father — and not his mother — would have needed to be American to fulfill the founding fathers’ definition of a natural-born citizen.

However, most legal scholars have said that Cruz meets the standard to be a natural-born citizen, and Trump has been criticized for stirring up controversy. For his part, Trump has claimed the issue is not as clear-cut as it seems and will almost certainly end up settled in court, which could be a distraction during the presidential race.

And on that issue, Trump appears to be correct.

Liberal legal scholars like Harvard Professor Laurence Tribe, who is a Hillary Clinton supporter and has been called President Barack Obama’s legal mentor, has been vocally raising the issue of Cruz’s eligibility.

And should Cruz get the GOP nomination, Democrats are almost certainly going to challenge whether he can serve.

Even Sen. John McCain, a war hero and the Republican nominee for the 2008 presidential election, had his legal status to serve as president challenged. McCain was born in Panama and both his parents were American citizens — his father even became a Navy admiral.

McCain was declared eligible to serve as president. But his situation was considerably less murky than Cruz’s.

And that means, almost certainly, the question of Cruz’s eligibility is headed for the courts.