Is the GOP erupting into a Civil War? - The Horn News 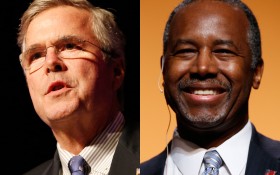 This isn’t the process GOP leaders were expecting. Poll numbers have shown that Republican voters seem to be pushing GOP insiders out, rejecting the buffet of former governors and congressmen. Instead, they’re clamoring for a party outsider.

New polls have Donald Trump, Ben Carson, and Carly Fiorina, none of whom have held political office, holding nearly 50% of the Republican vote, while establishment politicians like Jeb Bush can’t seem to gain any polling traction. It seems like a civil war in the Republican Party, and the numbers show it has caught the establishment by surprise.

The largest beneficiary has been Carson, who is now polling second to Trump. Carson has been holding court with hundreds of Iowans, declaring that he can be president of the United States.

At The Des Moines Register’s Political Soapbox at the Iowa State Fair, Carson, a Republican candidate for president, said Sunday: “We shouldn’t let the political class pick our presidents.”

Carson, who has a rags-to-riches story, has ignited curiosity and enthusiasm from conservatives with his call for a more civil, less partisan dialogue in the federal government. On the stage, he said: “Just because you disagree with someone doesn’t mean you’re their enemy.”

He sprinkled his 15-minute speech with jokes about aspiring to be a doctor while growing up in inner-city Detroit.

He said the chief problem facing the country is its long-term liabilities, which Carson said amount to $211 trillion over time.

He said: “The problems that threaten to destroy us are not Democrat problems or Republican problems. They are American problems.”