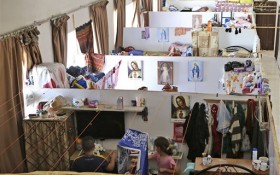 FUHEIS, Jordan (AP) — A year after tens of thousands of Iraqi Christians fled communities overtaken by Islamic State militants, their lives are on hold in exile: They won’t go back to Iraq, saying it’s not safe for Christians, but as refugees they’re barred from working in temporary asylum countries such as Jordan. Expectations of quick resettlement to the West have been dashed.

“We’ve lost hope in everything,” said Hinda Ablahat, a 67-year-old widow who lives with dozens of fellow refugees in plywood cubicles set up in a church compound in downtown Amman, the capital of Jordan. “We’ve been sitting here for a year and nothing’s happened.”

About 7,000 Christians from northern Iraq have found refuge in Jordan, including about 2,000 living in church-sponsored shelters.

On Saturday evening, Patriarch Louis Sako of Iraq’s Chaldean Catholic Church and Jerusalem-based Latin Patriarch Fouad Twal led hundreds of worshippers in an outdoor prayer service in the town of Fuheis, near Amman, to mark a year since the Iraqi Christians’ displacement.

The service included a message of encouragement from Pope Francis, saying he is appealing for solidarity with those victimized by fanaticism and intolerance, “often under the eyes and in the silence of all.” The church “does not forget and does not abandon her children who have been exiled on account of their faith,” read the message, first published late last week.

The words rang hollow to some in the crowd.

“Everyone has forgotten us,” said Johnny al-Behno, 25, standing in the back with friends. Al-Behno holds an engineering degree, but is forced to live off dwindling savings because of the ban on working.

Jordan struggles with high unemployment and says it cannot afford to integrate hundreds of thousands of Syrian and Iraqi refugees into the labor force.

The Christian exodus began a year ago when Islamic State militants swept across northern Iraq, targeting indigenous religious minorities. The militants forced out most of the area’s 120,000 Christians, many of whom now live in the nearby semi-autonomous Kurdish region.

Islamic State had been shelling the town all day, Atallah said. The family of six fled for safety at nightfall to Erbil, the capital of the Kurdish region, with just two small duffel bags holding clothes, passports and family photos. The drive normally takes less than an hour, but thousands were fleeing and the Atallahs only arrived in Erbil after midnight.

After three months, they relocated to Jordan, while oldest son Andre left for studies abroad.

Now home for Atallah, his wife Jinan, and their children Eidier, Sarah and Maryam is a church shelter in Amman they share with 60 other refugees. Plywood cubicles are lined up in rows, some decorated with posters of the Virgin Mary. Children run in the hallways while others play dominos in the common area.

Atallah, a thresher operator and carpenter, said the year in limbo has taken its toll. The parents and 20-year-old Eidier can’t work, while 15-year-old Sarah has missed a year of school.

Food and medical care are provided by Caritas, a Catholic charity, but with nothing to do, days are tedious. Atallah dreams of emigration to Australia. A brother who lives there has started the paperwork, but prospects are uncertain.

Atallah and other refugees say they’ll never go back home. “Iraq is not a safe place” for Christians, he said.

Refugee aid officials say Iraqi Christians had expected quick resettlement in the West when they first arrived in Jordan, but those hopes have been dashed in part because of the region’s escalating refugee crisis.

More than 4 million Syrians have fled conflict in their country since 2011, while Iraqis of all religions continue to flee ongoing sectarian violence back home.

Jordan hosts about 630,000 Syrian and 58,000 Iraqi refugees, according the U.N. refugee agency. Only a tiny minority has resettled in the West, with U.N. officials saying preference is given to the most vulnerable.

“They were born to live in the Middle East, not in any other place,” he said.