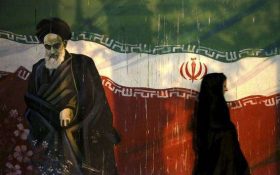 Hard-liners in Iran posted a video online Monday showing a detained Iranian-American businessman for the first time since his arrest in the country a year ago, a taunting challenge to the United States in the wake of the nuclear deal with Tehran.

The minute-long video featuring Siamak Namazi, dubbed over with what sounded like a dramatic film score, highlighted recent tensions between the Islamic Republic and the U.S.

It also comes as hard-liners in Iran’s security forces continue to target dual nationals and anyone with Western ties after the nuclear deal negotiated by the moderate administration of President Hassan Rouhani.

The montage of clips includes an Iranian drone flying over a U.S. aircraft carrier and American sailors on their knees after being briefly detained by Iran in January. It shows Namazi’s U.S. passport, his United Arab Emirates ID card and a clip of him in a conference room, his arms raised at his sides.

At the end of the video, it shows a still image of U.S. Rep. Ed Royce, a California Republican who chairs the House’s Foreign Affairs Committee. It quotes a statement by Royce from last year describing Namazi’s arrest as “latest show of contempt for America.”

A request for comment to Royce was not immediately answered early Monday.

It wasn’t clear why hard-liners chose to release the video, which was posted online Monday by Iran’s state-run Mizan judicial news agency. However, it comes as Namazi, who earlier advocated for closer ties between Iran and the U.S., faces his one-year anniversary of being detained in Iran.

Namazi is a son of Baquer Namazi, a former UNICEF representative who once served as governor of Iran’s oil-rich Khuzestan province under the U.S.-backed shah. His father was arrested after apparently being lured to Iran over his son’s detention.

The two were not released as part of a January deal that freed detained Washington Post journalist Jason Rezaian and three other Iranian-Americans in exchange for pardons or charges being dropped against seven Iranians.

That deal also saw the U.S. make a $400 million cash delivery to Iran.

Analysts and family members of those detained in Iran have suggested Iran wants to negotiate another deal with the West to free those held. In September, Iran freed a retired Canadian-Iranian university professoramid negotiations to reopen embassies in the two nations.

Others with Western ties recently detained in Iran include:

— Nazanin Zaghari-Ratcliffe , a British-Iranian woman sentenced to five years in prison on allegations of planning the “soft toppling” of Iran’s government while traveling with her young daughter; and

— Nizar Zakka , a U.S. permanent resident from Lebanon recently sentenced to 10 years in prison and a $4.2 million fine.

Still missing is former FBI agent Robert Levinson, who vanished in Iran in 2007 while on an unauthorized CIA mission.