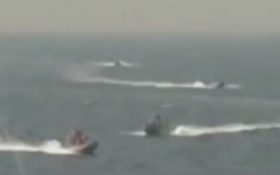 For years, critics have warned that President Barack Obama’s weak stance on our military and foreign policy would embolden our enemies.

The recent outrageous aggression by the Iranian navy towards our naval ships proves that criticism valid.

And Obama won’t do anything about it.

Wednesday, four Iranian attack boats conducted a “high-speed intercept” of the guided missile destroyer USS Nitze on Wednesday in the Persian Gulf, coming within a dangerous 300 meters before turning back. The U.S. Navy described the incident as “unsafe and unprofessional” and said it occurred in international waters in the narrow Strait of Hormuz.

“The Iranian vessels moved at high speed toward the Nitze, which was operating in accordance with international law in international waters and ignored maritime ‘rules of the road’ as set out in the 1972 Convention on the International Regulations for Preventing Collisions at Sea,” CNN reported. “According to the Navy official, the IRGC vessels ignored multiple warnings, creating a dangerous, harassing environment that could have pushed the Nitze to take defensive measures, escalating the situation.”

U.S. Navy video of the incident shared by Fox News shows American sailors on the Nitze firing flares and sounding the warship’s horn as the Iranian boats approached.

In January, months after the controversial nuclear deal with Obama, Iran captured and interrogated 10 U.S. Navy sailors who lost power and drifted into Iranian waters.

Last December, Iranian ships fired rockets near U.S. warship and other vessels in the Strait of Hormuz, and a month later flew an unarmed drone over the USS Harry S. Truman aircraft carrier in the Persian Gulf.

Is President Obama’s silence on the issue the right move? Or is it more of the same — weakness from the commander-in-chief? Comment below.