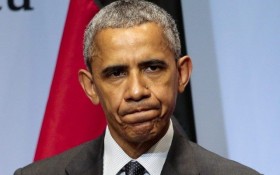 U.S. officials are scrambling to identify if the recent Iranian ballistic missile launch last month – the second such test since this summer – violates the terms of the unpopular Iranian nuclear deal that was signed by President Barack Obama over the summer.

The test occurred Nov. 21, according to an official Tuesday, coming on top of an Oct. 10 test Iran confirmed at the time. The official said other undeclared tests occurred earlier than that, but declined to elaborate. The official wasn’t authorized to speak on the matter and demanded anonymity.

Ballistic missiles are especially sensitive with Iran because they could provide the delivery system for a nuclear warhead. As part of nuclear negotiations struck with Obama, Iran in July accepted an eight-year extension of a ban on its ballistic missile program.

The November test was reportedly a mid-range missile with a range of 1,200 miles, and was launched from a known site near the Gulf of Oman.

The test may reflect an effort by Iranians to challenge the White Houses commitment to enforcing the nuclear pact, coming on top of the recent arrests of an American citizen and U.S. resident, and reports that Washington Post reporter Jason Rezaian was sentenced to an unspecified prison term following an espionage conviction.

Top Iranian officials have vowed to respond to any new forms of economic pressure from the West.

Sen. Bob Corker, the Republican chairman of the Senate Foreign Relations Committee, criticized the Obama administration’s lack of response to Iran’s “repeated ballistic missile tests.” Iran, he said Tuesday, “knows neither this administration nor the U.N. Security Council is likely to take any action.”