Iran: Obama apologized to us - The Horn News 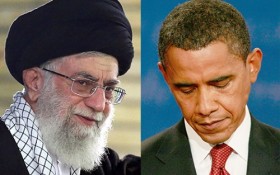 Reports out of Iran suggest that the hardline Islamic regime held American sailors and naval vessels in exchange for an apology from President Obama.

The Islamic nation accused the sailors of trespassing, and said they would be returned safely and promptly… as long as President Barack Obama apologized.

Now Iran is claiming that the Obama administration did just that.

“After determining that their entry into Iran’s territorial waters was not intentional and [the United States] apology, the detained American sailors were released in international waters,” a statement posted online by the Iranian Revolutionary Guard said Wednesday.

Gen. Ali Fadavi, the navy chief of Iran’s powerful Revolutionary Guard, was quoted earlier Wednesday by Iranian state TV as saying that an investigation had shown the Americans entered Iranian territorial waters because of “mechanical problems in their navigation system.”

Fadavi said the American boats had shown “unprofessional acts” for 40 minutes before being picked up by Iranian forces after entering the country’s territorial waters. He said Tehran did not consider the U.S. Navy boats violating Iranian territorial waters as an “innocent passage.”

U.S. Secretary of State John Kerry, who forged a personal relationship with Iranian Foreign Minister Mohammed Javad Zarif during the three years of nuclear negotiations, called his Iranian counterpart immediately on learning of the incident, according to a senior U.S. official. Kerry “personally engaged” with Zarif on the issue, said the official, who was not authorized to discuss the matter publicly.

Kerry later issued a statement saying he wanted to express his “gratitude to Iranian authorities for their cooperation in swiftly resolving this matter.”

Fadavi said Zarif “had a firm stance” during the telephone conversation with Kerry about the sailors’ presence in Iran’s territorial waters and “said they should not have come and should apologize.”

The nine men and one woman were held at an Iranian base on Farsi Island after they were detained nearby on Tuesday. The tiny outpost has been used as a base for Revolutionary Guard speedboats as far back as the 1980s.

The Navy said there were no indications they had been harmed while in custody.

The Revolutionary Guard’s official website published images of the detained U.S. sailors before their release, showing them sitting on the floor of a room. They look mostly bored or annoyed, though at least one of the sailors appears to be smiling. The sole woman had her hair covered by a brown cloth. The pictures also showed what appeared to be their two boats.

Iran’s “responsibilities and Islamic mercy” were cited by the country late Tuesday when they released the crew.