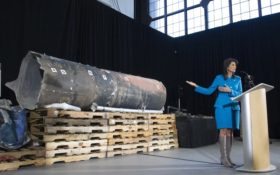 Flanked by singed missile remnants, President Donald Trump’s envoy to the United Nations declared Thursday that “undeniable” evidence proves Iran is arming Houthi rebels in Yemen, the latest bid by the Trump administration to rally the world against the Persian Gulf nation.

U.N. Ambassador Nikki Haley came to an emptied-out hangar at a military base not far from the U.S. Capitol, where fragments recovered from missiles launched from Yemen were paraded before reporters. Haley said the truck-sized missile segment behind her had been launched at the international airport in Riyadh, Saudi Arabia, and “led the U.S. intelligence community to conclude unequivocally that these weapons were supplied by the Iranian regime.”

“This is absolutely terrifying,” said Haley, one of the Trump administration’s most vocal critics of Iran. “Just imagine if this missile had been launched at Dulles Airport or JFK, or the airports in Paris, London or Berlin. That’s what we’re talking about here.”

The newly declassified evidence marked the most aggressive U.S. effort to date to substantiate its claim that Iran funnels weapons to the Houthis, an allegation widely accepted by most countries but that Tehran steadfastly denies. It comes as the Trump administration seeks to rally the world to punish Iran for its ballistic missile program and other worrying activities, despite backing away from the 2015 nuclear deal.

World powers that joined the U.S. in brokering that deal have voiced frustration at Trump’s moves to “decertify” Iran’s compliance with the deal as a prelude to renegotiating it. The Obama-era deal rolled back Iran’s nuclear program in exchange for billions in sanctions relief, but did not address Iran’s missile-building or support for militant groups in the Middle East.

“Everyone has focused on the nuclear deal, and Iran has hidden behind the nuclear deal,” Haley said. Gesturing to the missiles, she said, “These are the things they’re doing while we’re all looking the other way.”

Haley and other officials said there were two reasons the U.S. knew the missiles could have only come from Iran.

Some have specific markings indicating they were manufactured in Iran. One shredded piece of metal displayed to reporters bore the logo of Shahid Bakeri Industrial Group, an Iranian defense entity under U.S. sanctions.

Others have specific technical characteristics, such as a certain valve, that only Iranian missiles have — “Iranian missile fingerprints,” Haley said. One short-range ballistic missile fragment lacked large stabilizer fins that are common to that class of missile. The only known short-range ballistic missiles that don’t have those fins are Iran’s Qiam missiles, Haley said.

“The weapons might as well have had ‘Made in Iran’ stickers,” Haley quipped.

Not so, said Iran’s government, standing behind its assertion that Iran hasn’t sent any missiles to Yemen, where Shiite Houthi rebels aligned with Iran have taken over much of the country. Iran’s envoy to U.N., Gholamali Khoshroo, said it was “fake and fabricated” evidence that illustrates America’s “irresponsible, destructive and provocative role” in the region, according to a statement carried by Iran’s official IRNA news agency.

Haley argued that Iranian weapons shipments violated several U.N. Security Council resolutions, including the one that enshrined the 2015 nuclear deal. International legal experts have debated whether the allegation, if true, constitutes a clear-cut violation.

Either way, Haley did not articulate any specific steps the U.S. or other nations could take against Iran as a result of the evidence, which was included in a report to the U.N. secretary-general. But Haley said the U.S. would be working with other countries on “next steps.” She added that U.S. lawmakers and delegations from foreign nations would be invited to view the missiles firsthand.

To some critics, the spectacle at Joint Base Anacostia-Bolling carried eerie echoes of former Secretary of State Colin Powell’s 2003 speech to the U.N. making the case for the Iraq War. As he sought support for a new resolution, Powell said the U.S. had a “thick intelligence file” detailing Iraq’s weapons of mass destruction, at one point using satellite photos and a fake anthrax vial as props. Days later, the United States invaded. Weapons of mass destruction were never found.

Iran’s foreign minister, Mohammad Javad Zarif, drew the comparison on Twitter, with side-by-side photos of Haley on Thursday and Powell in his 2003 speech. “When I was based at the UN, I saw this show and what it begat,” tweeted Zarif, who was formerly Iran’s ambassador to the U.N.

Indeed, the U.S. acknowledged it couldn’t account for the full chain of custody, such as how the missiles got into Yemen — an admission that suggests there are still holes in the U.S. intelligence.

“We do not know when they were transported exactly,” said Defense Department spokeswoman Laura Seal.

Even so, Haley’s presentation was roundly cheered by Iran’s enemies, including Israel, the United Arab Emirates and Saudi Arabia. With U.S. support, a Saudi-led coalition has been fighting the Houthis on behalf of Yemen’s internationally recognized government. The civil war has turned Yemen, the Arab world’s poorest nation, into a proxy battleground for Sunni-led Saudi Arabia and Shiite-led Iran.