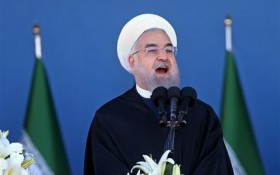 Iran’s President Hassan Rouhani on Sunday vowed to defend Muslim countries against terrorism and Israel while insisting that its neighbors should not feel threatened.

“If tomorrow your capitals face danger from terrorism or Zionism, the power that will give you a positive answer is the Islamic Republic of Iran,” he said. But he added that Iran would only help if Muslim countries asked it to, and said its military power was purely for defensive and deterrent purposes.

“The power of our armed forces is not against our southern, northern, eastern and western neighbors,” he said.

He appeared to be referring to Gulf Arab states, which have long viewed Iran as seeking to dominate the region. Saudi Arabia and Iran are longtime rivals that back opposite sides in the Syrian and Yemeni civil wars.

In 2010, Russia froze a deal to supply the sophisticated systems to Iran, linking the decision to U.N. sanctions. President Vladimir Putin lifted the suspension last year following Iran’s deal with six world powers that curbed its nuclear program in exchange for relief from international sanctions.

The United States and Israel have expressed concern over the missile systems, fearing they could upset the regional balance of military power.