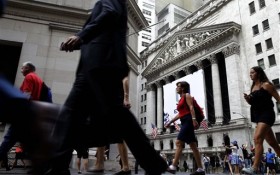 Panic is so passé.

Investors are keeping their cool — and keeping their hands off of their retirement accounts — despite huge swings in the stock market that sent it careening to its worst start to a year ever.

“They are just plugging away through the ups and downs of the stock market,” said Sarah Holden, director of retirement and investor research at the Investment Company Institute, an association of regulated funds.

It can be nerve-wracking to see retirement balances plunge with the market, conjuring fears of spending the golden years in a cardboard box. Retirement account administrators say they see a sharp uptick in phone calls when the market stumbles, and this downturn has been no different.

But then, sensibly, they don’t do much, says John Sweeney, executive vice president of investing strategies at Fidelity, one the largest administrators of 401(k) accounts.

Retirement savers have come to understand that they need to think long term. Many lived through the far more unsettling years of the financial crisis, then saw the market get back to its earlier peak in about 5 years. That sure felt like a long time then, but even those who retire this week can reasonably expect to live another 20 years, long enough for the riskiest parts of any saver’s portfolio to recover.

“They aren’t really worried about timing the market but having time in the market,” Holden says.

Vanguard, which oversees $3 trillion in assets, says that while the S&P 500 sank 8 percent during the first 11 days of the year there was no perceptible change in participant trading compared with the same period in the past two years.

“There are a few that panic and they are harming themselves when they choose to sell equities at a low,” said Jean Young, a senior research analyst with the Vanguard Center for Retirement Research. “But by and large we aren’t seeing a lot of activity.”

And this is while retirement savers at nearly every age group are putting more of their next egg into stocks, as advisers recommend.

Vanguard says every age group under 60 has increased the portion of their investments allocated to equities between 2007, the pre-crash peak, and 2014. The change was most dramatic for people under 25, who now have 87 percent of their portfolios in stocks, up from 67 percent in 2007. The figures for 2015 are not complete but Vanguard expects the trend to continue.

The median allocation for equities across all age groups is 83 percent, up from 80 percent in 2007.

So where’s all this cool-headed confidence amid the chaos coming from? As much from automation as from steely nerves or deep wisdom.

Funds based on an investor’s expected retirement date and other professionally managed products that allow investors to go on autopilot have become much more popular in recent years. These don’t require the investor to make as many judgment calls, leaving it up to professionals to adjust the risk based on when the investor plans to quit the daily grind and buy a Winnebago.

Vanguard said about 48 percent of its plan participants are in a professionally managed product, up from less than 20 percent in 2007. This has helped greatly reduce the number of people with extreme positions, such as holding all equities or no equities at all.

Also, employers have increasingly been enrolling employees automatically, and increasing the number of participants.

That leaves many investors unaware of exactly how much they hold in stocks, or unconcerned. Some are simply more confident in the concept that equities are long-term investments.

And even in a bad stock market, people tend to continue to contribute to their retirement plan. That helps them buy stocks at lower prices, setting them up for bigger gains later. That’s how those with long time horizons weathered the recession without much bruising — and it should help today’s hands-off investors recover too.

“People didn’t know what to do, so they didn’t do anything, which worked to their advantage,” Young said.