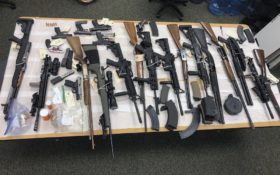 Authorities are investigating a suspected bomb-making operation after a man was injured and a woman was arrested following an explosion at a Northern California home.

Nicholas West suffered injuries to his hands and legs in the blast March 19 in a rural neighborhood northeast of Oroville, the Butte County Sheriff’s Office said.

Deputies evacuated the area as they searched the property and removed pieces of a detonated explosive device, a sheriff’s statement said.

Investigators believe West was trying to make some kind of bomb when the blast occurred, the statement said.

West, 26, was hospitalized in unknown condition.

The investigation is ongoing and detectives expect to make more arrests, officials said.