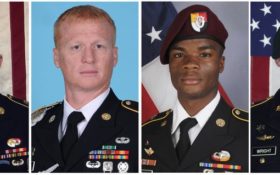 Multiple failures are to blame for the Niger ambush that killed four U.S. service members last October, the Pentagon said Thursday, citing insufficient training and preparation as well as the team’s deliberate decision to go after a high-level Islamic State group insurgent without proper command approval.

Defense Secretary Jim Mattis directed Gen. Thomas Waldhauser, head of U.S. Africa Command, to take immediate steps to address shortfalls, and has given senior leaders four months to complete a review and lay out a plan for additional changes.

At a Pentagon news conference, Waldhauser said he takes responsibility for what happened.

“I take ownership of all the events connected to the ambush of 4 October,” he told reporters. “Again, the responsibility is mine.”

Waldhauser said changes have already been made in the way military activities are carried out in Niger and elsewhere in Africa.

“We are now far more prudent on our missions,” the general said.

The summary lays out a confusing chain of events that unfolded on Oct. 3-4, ending in a lengthy, brutal firefight as 46 U.S. and Nigerien forces battled for their lives against more than 100 enemy fighters. Amid the chaos, it identifies repeated acts of bravery as the outnumbered and outgunned soldiers risked their lives to protect and rescue each other during the more than hour-long assault.

“This investigation identifies individual, organizational, and institutional failures and deficiencies that contributed to the tragic events of 4 October 2017,” the summary said. But it concludes that “although the report details the compounding impact of tactical and operational decisions, no single failure or deficiency was the sole reason for the events of 4 October 2017.”

Military officials found that the U.S. forces didn’t have time to train together before they deployed and did not do pre-mission battle drills with their Nigerien partners. And the report found there was a lack of attention to detail and lax communication about missions that led to a “general lack of situational awareness and command oversight at every echelon.”

Waldhauser said the report, which has not yet been made public in full, singles out three individuals whose actions could be faulted. Whether they are disciplined is a matter to be decided by U.S. Special Operations Command, he said.

Robert S. Karen, the assistant secretary of defense for international security affairs, who spoke alongside Waldhauser, said there are about 800 U.S. troops in Niger, and that none are supposed to be engaged in direct combat.

According to the report, the Army Special Forces team left Camp Ouallam on Oct. 3 to go after Doundou Chefou, an IS leader who was suspected of involvement in the kidnapping of an American aid worker. But the team leader and his immediate supervisor submitted a different mission to their higher command, saying they were simply going out to meet tribal leaders. That less-risky mission was approved, but when the Ouallam team got to the location the insurgent wasn’t there.

Senior commanders, unaware of the team’s earlier actions, then ordered the troops to serve as backup for a second team’s raid, also targeting Chefou. That mission was aborted when weather grounded the second team. The Ouallam team members were then was ordered to another location to collect intelligence also linked to Chefou, which they did without problems. On their way back to their home base they stopped at the village of Tongo Tongo to get water.

The report concludes that although the enemy can move freely around the village area, “there is not enough evidence to conclude that the villagers of Tongo Tongo willingly (without duress) aid and support them. Additionally, there is insufficient evidence to determine if villagers aided the enemy or participated in the attack.”

The report says that the four soldiers killed in the attack “gave their last full measure of devotion to our country and died with honor while actively engaging the enemy.” It says that none were captured alive by the enemy, and all died immediately or quickly from their wounds. Sgt. La David Johnson and two Nigerien soldiers got separated from the others during the battle and were gunned down, but his body wasn’t found until two days later.

The investigation was led by U.S. Africa Command’s chief of staff, Maj. Gen. Roger Cloutier Jr., whose team conducted dozens of interviews across the U.S., Europe and Africa.

Families of the fallen have expressed frustration with the incident and the briefings they got.

“The whole thing was a screwed-up mess,” said Arnold Wright, father of Staff Sgt. Dustin Wright of Lyons, Georgia, who was killed in the attack. Wright said he’s concerned the Army may be pinning blame on lower-ranking soldiers and not accepting responsibility high enough up the chain of command.

The briefing, he said, gave the impression “that the captain, the team leader, that he mischaracterized the mission” as one to reach out to local leaders rather than a mission to target the insurgent.