Investigation closing in on Biden’s brother? - The Horn News 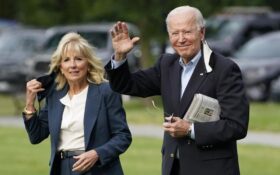 The mainstream media may have finally turned on Joe Biden.

The Washington Post closed out May by reporting an in-depth story on the scandals, ethical questions, and alleged business malpractice perpetrated in the Biden family.

James Biden—who “goes by Jim and is known as Jimmy within the family”—just turned 73 last month. According to the Post, he’s been at the family game of milking his brother’s connections since the Seventies. It shows how James Biden may have helped groom Hunter Biden to be a first-class grifter. And it proves that Hunter Biden’s laptop was 100 percent authentic.

Jim Biden began his decades of debauchery by opening a nightclub in Delaware with generous loans from bankers who’d been “contacted” by the young Senator Joe Biden. The president insists he didn’t pressure them unethically.

The trail has never ended, as Jim and Hunter use their family connections to rack up huge profits, the story says.

In 2000, a Biden donor named Leonard Barrack gave Jim and his wife, Sara, more than half a million dollars to gin up business for Barrack “through his family name and his resemblance to his brother, United States Senator Joseph Biden of Delaware,” according to Barrack’s lawsuit. He had to sue because the president’s brother pocketed the money but used the lavish international trips that Barrack funded to create business for himself.

According to his former business partners, the president’s brother pulled another fast one with Azzam Medical Services and Diverse Medical Management. They claim Jimmy Biden told investors he’d use his family connections to win business contracts—and even promised that Joe would somehow promote the business during the 2020 presidential campaign.

And the story says he was always texting Hunter Biden, “enthusiastically outlining ways for the two of them to leverage political connections” in pursuit of money.  Jimmy Biden wanted to find ways he and Hunter “could tap the Democratic delegation for help” in finding government contracts, according to the Post.

“You need to call me now,” he messaged Hunter in October 2017. “Just got off the phone with your father…We have the two biggest days of our business life in front of us!!!!!! We must be smart, or everything goes up in smoke! Please call me. You MUST remain calm.”

Incidentally, The Washington Post reported that it got that message from a copy of the hard drive from Hunter Biden’s laptop, and “the emails cited in this article were authenticated by two forensic analysts.”

Before long, investigators wanted records about their ill-gotten gains, seeking information about 150 transactions Jimmy Biden and Hunter Biden had with companies operating in China.

“I think James Biden was very much a part of this,” said Senator Chuck Grassley, R-Iowa, at the time.

Jim Biden is important because he blows the lid off the Biden family’s plausible deniability: He comes out and tells you he’s shaking down businesses for his older brother.

When James Biden took over Paradigm Global Advisors in 2006, he told the board he was the answer to all their financial problems. “Don’t worry about investors,” he reportedly said. “We’ve got people all around the world who want to invest in Joe Biden.”

That was in 2006 when Biden was just one of a hundred senators. Imagine how many more people wanted to “invest in Joe Biden” after Barack Obama made him vice president of the United States, one heartbeat away from the presidency. Imagine how that number has exploded since he’s become the president.

But the most important thing about the Post article is that Jimmy dropped the dime on his older brother. In Joe Biden’s autobiography Promises to Keep, the president claims Jimmy kept a check that he had personally turned down, because a union official wanted a quid pro quo. Joe wanted to claim he was too pure to take money for favors—only Jimmy would do something like that.

“This notion I did something that he wouldn’t do? Give me a break,” Jimmy Biden told the Post.

The president’s brother denies all wrongdoing. He told the Post that he rejects “the notion I am some underworld figure and I am a fixer or the cleaner.” He said he always acts in “a very ethical way.”

But it looks like Jim Biden has broken in the next generation on how to sell out the United States for profit. “Hunter, we are cut from the same cloth,” Jim told Hunter Biden.

This may be a new story for the old Fake News media, but not to readers of The Horn News. We have been reporting on the story of Jim Biden’s corruption for years. And we keep updating the story as the facts come forward: Our latest story on Jim Biden came out just a matter of weeks ago.

Keep reading The Horn to get tomorrow’s stories today.