Investigating the strength of the North Korean military - The Horn News 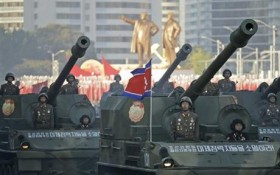 With tensions high and the United States and South Korea ready to hold their massive annual war games next week, which North Korea sees as a dress rehearsal for invasion, Pyongyang is warning it will respond to any violations of its territory with “merciless” retaliation, including strikes on Seoul and the U.S. mainland.

“Military First” is the national motto of North Korea, which is ever wary of threats to its ruling regime and still technically at war with Washington and Seoul. Nuclear-armed and boasting the world’s fourth-largest military, it is persistently seen as the biggest challenge to the security status quo in East Asia, an image it loves to promote and showcased in an elaborate military parade last October.

The joint South Korea-U.S. military exercises are to begin March 7 and last more than a month. Tensions always go up when they do.

Pyongyang has poured huge resources into developing its nuclear and missile arsenals and maintaining its conventional forces. About 5 percent of its 24 million people are on active military duty, and another 25-30 percent are in paramilitary or reserve units, ready for mobilization.

But just how strong is Kim Jong Un’s army?

Here’s a look, based on what AP reporters and photographers have seen on the ground and the latest report to the U.S. Congress by the Office of the Secretary of Defense:

BEHIND THE NUMBERS: This is, and always has been, North Korea’s real ace in the hole. While its threat to launch a nuclear attack on the U.S. mainland appears to be well beyond its current capabilities, turning the South Korean capital into a “sea of fire” is not.

The ground forces of the Korean People’s Army form the largest segment of the military, by far. Seventy percent of them are forward-positioned around the Demilitarized Zone for quick mobilization in a contingency with South Korea; they are extremely well dug-in with several thousand fortified underground facilities.

Their arms are mostly “legacy equipment,” produced or based on Chinese and Russian designs dating back as far as the 1950s. But they have in recent years unveiled new tanks, artillery and infantry weapons. In the October parade, the KPA displayed a new 240 mm multiple rocket launcher with eight tubes on a wheeled chassis. Kim Jong Un was recently shown by state media observing a new, longer-range anti-tank weapon.

“Despite resource shortages and aging equipment, North Korea’s large, forward-positioned military can initiate an attack on the ROK (South Korea) with little or no warning,” the U.S. report concluded. “The military retains the capability to inflict significant damage on the ROK, especially in the region from the DMZ to Seoul.”

BEHIND THE NUMBERS: Divided into east and west fleets with about a dozen main bases, the navy is the smallest branch of the North Korean military. But it has some significant strengths, including hovercraft for amphibious landings and one of the largest submarine forces in the world. An estimated 70 attack, coastal or midget-type subs provide stealth and strongly bolster coastal defenses and possible special operations. It has no “blue water” — or long-range — naval forces and relies heavily on a large but aging armada of small coastal patrol craft. But it, too, is upgrading some of its surface ships and has made a show of its efforts to domestically develop a submarine capable of launching a ballistic missile.

BEHIND THE NUMBERS: Here’s where the “legacy” aspect of the North Korean military really kicks in. North Korea hasn’t acquired any new fighter aircraft for decades. Its best fighters are 1980s-era MiG-29s bought from the Soviet Union, the MiG-23 and SU-25 ground attack aircraft. They all suffer chronic fuel shortages and pilots get little training time in the air. Its air-defense systems are aging and it continues to maintain lots of 1940s-era An-2 COLT aircraft, a single-engine, 10-passenger biplane, which would probably be most useful for the insertion of special forces troops behind enemy lines. Interestingly enough, it also has some U.S.-made MD-500 helicopters, which it is believed to have acquired by bypassing international sanctions. They were shown off during a parade in 2013.

BY THE NUMBERS: Not specified in report to Congress. Somewhere around 180,000 troops. Estimates vary.

BEHIND THE NUMBERS: North Korea is fully aware that it is outgunned, technologically inferior and logistically light years behind its adversaries. But it also knows how to shift the equation through asymmetric tactics that involve stealth, surprise and focusing on cheap and achievable measures with an outsized impact. Special forces operations are among them — and the North’s special forces are the “most highly trained, well-equipped, best-fed and highly motivated” units in the KPA. Commandos can be inserted into the South by air or sea, and possibly on foot through tunnels across the DMZ. The North is working hard on its cyberwarfare capabilities, another key asymmetric military tactic. It is believed to have a growing number of drones.

BEHIND THE NUMBERS: North Korea claims to have tested its first hydrogen bomb on Jan. 6, the day after the Department of Defense report came out. That claim has been disputed, but there is no doubt it has nuclear weapons and its technicians are hard at work boosting their quantity and quality. Major caveat here: The operational readiness of its nuclear weapons and many of its ballistic missiles is debatable.

Pyongyang’s main hurdles are making nuclear warheads small enough to fit on its missiles, testing re-entry vehicles required to deliver them to their targets on an intercontinental ballistic missile and improving and testing the arsenal for reliability and accuracy. Its Taepodong-2 ballistic missile is the militarized version of the rocket it launched on Feb. 8 with a satellite payload. North Korea has yet to demonstrate that it has a functioning ICBM, generally defined as having a range of over 3,418 miles.

This one is a question mark. The U.S. Defense Department claims Pyongyang is continuing research and development into both, and could use them, but offered no details on biologicals in its recent assessment. It said Pyongyang “likely” has a stockpile of “nerve, blister, blood and choking agents” that could be delivered by artillery shells or ballistic missiles. The North is not a signatory of the Chemical Weapons Convention and its troops train to fight in a contaminated environment.