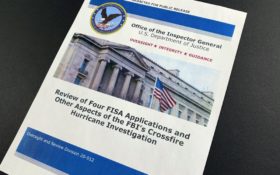 The FBI was justified in opening its investigation into ties the Trump presidential campaign had “serious performance failures” up the bureau’s chain of command, the Justice Department’s internal watchdog said in a highly anticipated report Monday.

Its nuanced conclusions deny a clear-cut vindication for Trump’s supporters or critics, though it did find errors and misjudgments likely to be exploited by Republican allies as the president faces a probable impeachment vote this month.

The president has also sought to downplay expectations, saying repeatedly that he was more eager for the report of John Durham, the hand-picked prosecutor selected by Attorney General William Barr to conduct a separate review of the Russia probe.

Barr rejected the inspector general’s conclusion that there was sufficient evidence to open the investigation.

“The Inspector General’s report now makes clear that the FBI launched an intrusive investigation of a U.S. presidential campaign on the thinnest of suspicions that, in my view, were insufficient to justify the steps taken,” Barr said in a statement.

The inspector general identified 17 “significant inaccuracies or omissions” in applications for a warrant from the secretive Foreign Intelligence Surveillance Court to monitor the communications of former Trump campaign adviser Carter Page and subsequent warrant renewals.

The errors, the watchdog said, resulted in “applications that made it appear that the information supporting probable cause was stronger than was actually the case.”

But the report also found the bureau was justified in eavesdropping on Page and that there was not documented or testimonial evidence of any political bias.

Republicans have long criticized the process since the FBI relied in part on opposition research from a former British spy, Christopher Steele, whose work was financed by Democrats and the Clinton campaign, and that fact was not disclosed to the judges who approved the warrant.

The watchdog found that the FBI had overstated the significance of Steele’s past work as an informant, omitted information about one of Steele’s sources who Steele had called a “boaster” and who Steele said the source “may engage in some embellishment.”

The report’s release, coming the same day as a House Judiciary Committee impeachment hearing centered on the president’s interactions with Ukraine, brought fresh attention to the legal and political investigations that have entangled the White House from the moment Trump took office.

The FBI’s Russia investigation, which was ultimately taken over by special counsel Robert Mueller, began in July 2016 after the FBI learned that a former Trump campaign aide, George Papadopoulos, know about dirt on Democratic opponent Hillary Clinton in the form of stolen emails.

Those emails, which were hacked from Democratic email accounts by Russian intelligence operatives, were released by WikiLeaks in the weeks before the election in what U.S. officials have said was an effort to harm Clinton’s campaign.

Months later, the FBI sought and received the Page warrant. Officials were concerned that Page was being targeted for recruitment by the Russian government, though he has denied wrongdoing and has never been charged with a crime.