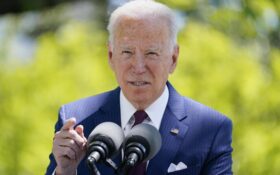 A Washington strategist went on Fox Business last Sunday. He predicted that former President Donald Trump would run for president in 2024… but not against current President Joe Biden.

“I think ultimately in 2024 President Trump does run again. At least that is my hope. But I don’t think it will be against Joe Biden,” Jason Miller, a former Trump adviser, told Fox’s Maria Bartiromo.

Miller served as the chief spokesperson for Trump’s 2016 campaign.

He now works as a tech executive, and he went on Fox Business to comment on proposed regulations to Facebook.

However, the conversation soon turned toward Biden’s poor approval ratings.

Bartiromo remarked, “After ten months of this administration, even the anti-Trumper are saying, ‘Where’s President Trump?”

She spoke of Trump’s plans to visit Iowa, and she cited The Des Moines Register recent poll of Trump’s favorability ratings: 53 percent in Iowa.

“All these crises are things that Joe Biden has created, whether it be the southern border, whether it be China’s aggression, whether it be the disastrous handling of Afghanistan. I think a lot of people are having buyer’s remorse,” he said. “I don’t know if we can handle another three years of this.”

He later speculated about the Democrats’ pick for the 2024 election. “I think it will be a Kamala Harris or maybe a Gavin Newsom,” he said, referring to the vice president and to the governor of California.

Trump has consistently polled high in the pool of potential candidates for the 2024 election. However, it remains unclear whether Trump can replicate the success his 2016 campaign.

In a blog post earlier this year, Twitter vowed to ban Trump permanently, even in the even of another run for the presidency.

Read more: Biden gets Trump’d in the polls