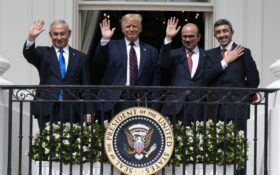 Many polls are against President Donald Trump.

They’re projecting him behind even in traditional “red” states, predicting his Democratic rival Joe Biden will rack up a victory in a historic landslide.

And very few experts think he has any chance of catching up.

If you think this sounds like October 2016 — well — you’re onto something.

This is exactly how pundits, analysts, skeptics, and other critics felt in the last election.

So it looks like the path to a Trump victory is headed for a case of history repeating as Biden sits atop the mainstream polls. He’s leading every single one of them, just as Hillary Clinton did four years ago, and is ahead in nearly all of the key states.

But a look at the president’s travel record and ad spending not only shows a key path to reelection… but also exactly where he can pick up the votes needed to win the Electoral College again.

Minnesota hasn’t selected a Republican for president since voting for Richard Nixon in the 1972 landslide.

It even went Democratic in 1984 – the only state to vote against Ronald Reagan.

But where the experts see a solid blue state, Trump sees an opportunity.

Today, polls in the state are wildly inconsistent. Some show Biden up by double digits, but some have found a tight race of 2-3 points.

Given Trump’s emphasis on the state, it seems likely his famously sharp internal polling has revealed an opportunity, just as it spotted a chance in Pennsylvania, Michigan and Wisconsin in 2016 well after the experts had written him off in those states.

In the end, the combined 46 Electoral College votes in the three states were the key to his victory.

Today, Biden is desperately trying to flip all three.

Trump taking Minnesota in return would be a brilliant strategic coup: Assuming no other changes to the map from 2016, he’d have 270 votes in the Electoral College, giving him victory by the closest possible margin.

But every candidate wants some breathing room, so Trump is also very quietly trying to flip three other Clinton states: Nevada, New Hampshire and at least part of Maine.

In Nevada, the Republican Party has quietly narrowed the registration gap. The Nevada Independent reports that the Democrats had an 88,800 lead in registrations in 2016… but here in 2020, that advantage has shrunk to 75,000.

The difference is enough to swing a close election – and why Trump had been planning to visit the state prior to his coronavirus diagnosis.

New Hampshire also shows Biden ahead, often by a lot – except a New York Times poll just weeks ago found him ahead by only 3 points, and a University of New Hampshire poll over the summer had Trump up by 2.

Trump and his closest surrogates – including his sons – have made multiple visits to the state as a result. Republicans have told the Boston Globe they’ve built a “turnout machine” in the state, with 1.25 million voter contacts including phone calls and door knocks.

That’s a massive number considering that just under 700,000 voters in state turned up at the polls in 2016.

And Maine is a unique situation, splitting its four votes by both state and district. Trump won one that way in 2016, and is hoping for three and perhaps all four in 2020.

Donald Trump Jr. is visiting in the coming week. Trump himself visited over the summer to remind the state’s all-important lobster industry that he got the European Union to cut tariffs on shellfish.

“What I’ve done for Maine is what nobody has done,” Trump said at the time.

Combined, the four added up have 24 votes in the Electoral College… or enough to give Trump an edge even if Biden rebuilds the Democrats’ “blue wall” in Pennsylvania, Michigan and Wisconsin.

And that would lead to another surprise on Election Night… just as he planned it out four years ago.