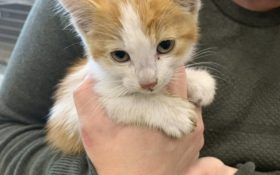 A kitten stuck on a roof in the cold was saved by firefighters in Georgia.

The 6-week-old kitten was nursed back to health Wednesday after her rescue, Cobb County Fire and Emergency Services said in a post on Facebook.

The female kitten quickly recovered after she was given milk, cat food, and was warmed in towels, a fire official told the Marietta Daily Journal.

“A future fantasy life on the farm is in order for this adorable kitty,” the post added.

The department decided to name the kitten “Shingles” after asking followers on social media to help name the feline, a fire official said.