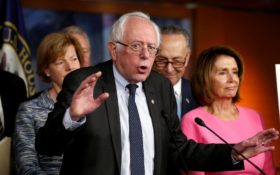 Election-year political rhetoric can always get ugly, but presidential hopeful Bernie Sanders has sunk to a new low in a charge he laid against President Trump: Trump is an anti-Semitic terrorist!

Sen. Sanders made the allegation in an article he wrote for a left-wing Jewish publication called Jewish Currents titled “How to Fight Anti-Semitism.”

In it, Sanders defends socialist Rep. Ilhan Omar while saying Donald Trump is guilty of murdering Jews because of his rhetoric.

“On October 27, we marked one year since the worst antisemitic attack in our country’s history, when a white nationalist walked into the Tree of Life synagogue in Pittsburgh and murdered 11 people and injured six others,” Sanders wrote.

The killer had a “twisted belief that Jews were part of a nefarious plot to undermine white America—a plot to assist in the ‘invasion’ of the United States by a caravan of migrants from Latin America.”

“This vicious lie about an ‘invasion’ had been repeated endlessly in right-wing media, on Fox News, across the internet, and, most disgracefully, by the president of the United States,” Sanders wrote.

Of course, President Trump has never claimed that the Jewish people are somehow leading illegal immigrants into the United States. He’s regarded as one of the most pro-Israeli presidents in history, and his daughter, Ivanka, converted to Judaism when she married Jared Kushner, one of Trump’s top advisers.

The Tree of Life killer was also an outspoken anti-Trump voter.

But Bernie didn’t stop at accusing the president of killing 11 innocent Americans. He also claimed the president is turning America into a tinpot dictatorship.

Sanders wrote that “intolerant, authoritarian” rulers “exploit people’s fears by amplifying resentments, stoking intolerance and inciting hatred against ethnic and religious minorities, fanning hostility toward democratic norms and a free press, and promoting constant paranoia about foreign plots. We see this very clearly in our own country. It is coming from the highest level of our government.”

“It is coming from Donald Trump’s tweets, and from his own mouth,” Sanders wrote.

So, Trump is an anti-Semitic murderer and a wannabe dictator, in Sanders’ view?

That would come as news to the rabbi of the Tree of Life synagogue, who personally met with Donald Trump just days after the shooting.

Rabbi Jeffrey Myers came under massive pressure from political leaders to shut the synagogue’s doors to a presidential visit.

A leftist Jewish website called “Bend the Arc” had a petition signed by 22,000 liberals telling President Trump that the Pittsburgh synagogue shooting is “the direct culmination of your influence.”

“President Trump, you are not welcome in Pittsburgh until you stop targeting and endangering all minorities,” the group said.

Rabbi Myers said some liberals told him he was a disgrace to Judaism and should get “un-circumcised.”

But Myers said that attitude is un-American.

“I’m a citizen. He’s my president. He is certainly welcome,” Myers said.

More than that, the rabbi said President Trump was “very warm, very consoling” during his visit.

“I must say, throughout the time we spent together, I was pleasantly surprised by a warm and personal side to the president that I don’t think America has ever seen,” the rabbi told the media.

Even CNN had to report “Pittsburgh synagogue rabbi says Trump showed ‘warm and personal side’ during visit.”

Even liberal American Jewish leaders say this is just about scoring cheap political points against the president—by making the most extreme allegations in modern U.S. political history.

A renowned Holocaust historian, Deborah Lipstadt, wrote that Bernie Sanders’ piece proves that he “is more interested in scoring points against the right than he is in helping alleviate the results of this longest hatred.”

As another presidential candidate said, “Yes we can.”