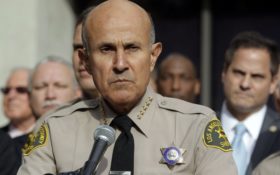 Former Los Angeles County Sheriff Lee Baca has reported to prison to begin serving a three-year prison sentence for a corruption conviction, according to federal records.

Baca, 77, who has been diagnosed with Alzheimer’s disease, had been free on bail since appealing his obstruction of justice conviction three years ago. The U.S. Supreme Court declined his final appeal last month and Baca was ordered to begin serving his term by Wednesday.

Baca was behind bars at the Federal Correctional Institution La Tuna, near El Paso, Texas, according to a federal Bureau of Prisons online database.

Baca, who resigned amid the corruption scandal in 2014, was convicted of lying to the FBI and trying to thwart the agency’s investigation into corruption in the nation’s largest jail system.

Agents had been secretly looking into allegations of bribery and inmate beatings by jail guards in 2011, when Baca and his top lieutenants learned that an inmate was acting as an FBI informant.

Baca and top brass hatched an elaborate plot to hide the informant in the jail system by booking him under false names and moving him to different locations. They also tried to intimidate an FBI agent by threatening to arrest her.

Their interference scuttled the investigation into civil rights abuses by guards but exposed corruption among the highest ranks of the department, snaring Baca and his top lieutenant.

Baca and his chief deputy, Paul Tanaka, were both convicted. Tanaka was sentenced to five years in prison.

More than 20 members of the department, including lower level deputies who beat inmates, were also convicted as a result of the investigation.

Baca’s lawyers on Wednesday filed a new motion to vacate his conviction.

Baca unsuccessfully challenged his convictions at the 9th U.S. Circuit Court of Appeals on several grounds, including that jurors should have been told of his Alzheimer’s diagnosis.