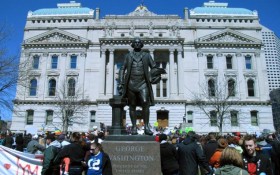 It could be America’s strictest abortion law yet — and pro-life supporters are hoping it will help save thousands of lives, and start a movement that spreads nationwide.

A new that would make Indiana only the second state to ban abortions sought because a fetus has a genetic disorder, such as Down syndrome, is heading to Gov. Mike Pence for possible approval.

In the new law, women wouldn’t be allowed to terminate a pregnancy simply because of a genetic abnormality. The measure would allow doctors who violate the law and perform abortions in such cases to be sued for wrongful death, or possibly face professional discipline.

The bill also says that a woman considering an abortion must listen to the baby’s heartbeat and view an ultrasound of the fetus at least 18 hours before aborting the baby, unless she opts out.

The measure includes other provisions regulating the handling of miscarried or aborted fetuses, requiring all abortion providers to cremate or bury fetuses. It would protect babies from abortions for race, color, national origin, ancestry or gender of the fetus.

It also would make it a felony to transfer fetal tissue, a move aimed at Planned Parenthood after secretly recorded videos showed officials with the organization discussing how they sometimes supply fetal tissue to scientists.

The GOP-controlled House voted 60 to 40 Wednesday in favor of the bill, which already had been approved last week 37 to 13 in the Republican-dominated Senate.

Pence is an anti-abortion social conservative who is facing a tough re-election in November and will have to count on his evangelical base producing a strong turnout.

But he doesn’t have to sign for the measure to take effect, as any bill approved by the Indiana Legislature that goes unsigned by the governor will automatically become law. That means Pence would have to veto the bill to shut it down, which is unlikely given his faith and political stands.

North Dakota is the only other state to ban abortions sought because of genetic fetal abnormalities. The state’s Republican-led Legislature passed a measure in March 2013 that blocks abortions based on unwanted gender or a genetic defect.