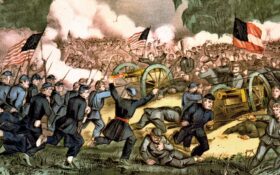 A one-of-a-kind link to the Civil War has died.

Irene Triplett, who had been collecting the last government pension from the conflict, died this week in a North Carolina nursing home at the age of 90, according to The Wall Street Journal.

She had been collecting $73.13 a month from the Department of Veterans Affairs for her father’s service in the Civil War – a conflict that ended 155 years ago.

And amazingly, she’s linked to both sides of America’s bloodiest chapter.

But just before Gettysburg, he deserted – which turned out to be a smart move. The Journal notes that the 26th was practically wiped out in the battle, with 734 of the 800 men killed, wounded or captured.

The Journal notes he was despised back home in North Carolina after the war as a result.

He remarried to a much younger woman very late in life, and in 1930 the couple had Irene. Born with cognitive disabilities, she was eligible for the pension as the disabled child of a veteran.

Triplett didn’t have an easy life; a few years ago she told The Journal that she was beaten as a youth by both her teachers and her parents.

“I didn’t care for neither one of them, to tell you the truth about it,” she told the newspaper in 2014. “I wanted to get away from both of them. I wanted to get me a house and crawl in it all by myself.”

After her father’s death in 1938, she moved into a poorhouse with her mother.

“Irene could not recall much of her childhood and has no recollection of Mose,” the Wilkes Genealogical Society wrote in a magazine article cited by the Washington Post. “She has virtually no memories of fun, presents, friends, neighbors or such as they lived so isolated, and she had to work on the farm each day where they primarily raised chicken[s] and kept some hogs and cows as well.”

However, in her later years, Civil War buffs would visit to talk with her and give her gifts – including money, Dr. Pepper, and chewing tobacco.

“She’s a part of history,” Dennis St. Andrew, one of her supporters and a former commander of the North Carolina Sons of Union Veterans of the Civil War, told the Journal. “You’re talking to somebody whose father was in the Civil War, which is mind-bending.”

And despite her difficult past, her most distinguishing characteristic was her laugh.

“Even if you tripped or dropped something, she’d laugh,” Jamie Phillips, the activities director at her nursing home, told The Washington Post. “She was set off by anything. I never saw her angry. Everything was funny.”

The Post notes that she broke her hip last week and died of complications from the injury several days later.

Irene Triplett, who has died at age 90, was the final American to receive a Civil War pension — $877.56 a year from the @DeptVetAffairs. Her father, Mose, served as a private in the Confederate Army before defecting to the Union.https://t.co/CWoX8gJcCp

The story calls to mind another incredible link to our nation’s past: Two of the grandsons of President John Tyler – who took office nearly 20 years before the Civil War – are, or at least were until very recently, still alive.

The two are not public figures so little is known of their current whereabouts.