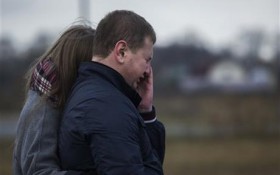 British Prime Minister David Cameron declared Thursday it was “more likely than not” that a bomb brought down a Metrojet flight packed with Russian vacationers.

Cameron said he had grounded all flights to and from Egypt’s Sinai Peninsula, stranding thousands of British tourists at the Red Sea resort of Sharm el-Sheikh, because of “intelligence and information” indicating that a bomb was the likely culprit in the crash Saturday that killed 224 people.

Islamic State group has claimed that it brought down the plane in the Sinai, a report rejected by Russian and Egyptian officials as not credible. Egypt is fighting an Islamic insurgency in the area where the plane crashed.

Cameron said he had “every sympathy” with the Egyptians, who rely so heavily on tourism, but added he had to “put the safety of British people first.”

“We don’t know for certain that it was a terrorist bomb … (but it’s a) strong possibility,” Cameron said at his London office at 10 Downing St. shortly before a previously scheduled meeting with Egypt’s president. “There’s still an investigation taking place in Egypt. We need to see the results of that investigation.”

He said he would call Russian President Vladimir Putin later Thursday to discuss the crash.

A British team is working to tighten security at the Sharm el-Sheikh airport with an eye toward resuming flights. Cameron said “we want to start as soon as possible” to bring tourists home, and empty planes will be flying out from Britain to bring people back.

But the British leader cautioned it would take “some time” to repatriate the thousands of Britons in the resort of Sharm el-Sheikh.

Russian Foreign Ministry spokeswoman Maria Zakharova said if Britain had information about the bomb, it’s “really shocking” that it hasn’t shared it with Russia. She urged Britain to immediately give any such information to the investigators.

Egyptian officials have condemned Britain’s travel ban as an overreaction.

He said, regarding U.S. and British allegations that the Russian flight may have been downed by a bomb, “the investigation team does not have yet any evidence or data confirming this hypothesis.”