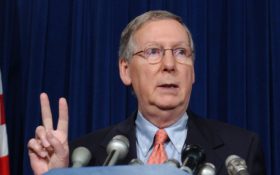 He says he is planning to run again as leader of Senate Republicans – a position that could potentially be majority leader if this year’s midterm elections put the GOP back in control of the body.

“I’m going to be running again for leader later this year,” he told reporters this week after one asked how long he intended to remain in control of his party’s delegation, according to The Hill.

That’s likely to set up another public confrontation with Trump, who has made no secret of his dislike for McConnell. Trump has repeatedly and publicly insulted McConnell with phrases such as “broken old crow” and – just this past week – “loser.”

And he’s reportedly urged GOP lawmakers in the Senate to dump him as their leader – something they’ve been hesitant to do so far.

While the two were never close, they worked together during Trump’s term to confirm conservative judges to the federal courts – including three to the Supreme Court – and push much of the Trump agenda through Congress.

But that changed dramatically and likely irrevocably last February. McConnell didn’t vote to convict Trump during his second impeachment, but he did deliver a scathing speech in which he blamed the former president for the riot at the U.S. Capitol on Jan. 6.

“There’s no question, none, that President Trump is practically and morally responsible for provoking the events of the day,” McConnell said in February.

While he said Trump – at that point an ex-president – couldn’t be impeached once outside of office, he suggested both criminal and civil prosecution.

“All Republicans who voted for Democrat longevity should be ashamed of themselves, in particular Mitch McConnell, for granting a two-month stay which allowed the Democrats time to work things out at our Country’s, and the Republican Party’s, expense!” Trump said in a statement at the time.

The GOP is widely expected to regain control of the House, potentially putting current Minority Leader Kevin McCarthy, R-Calif., in control there.

Republicans have a slightly trickier path in the Senate, as they’re defending 20 seats, compared to just 14 for Democrats.

The Cook Political Report considers six of those seats to be tossups: three currently held by Republicans, and three by Democrats. In addition, three more – one Democrat, and two Republican – could be potentially competitive.

A “wave” election – as often takes place in the cycle after a new president takes office – could give the edge to the GOP, which in turn could lead to control over the Senate, where McConnell has kept tight control over his conference as both minority leader (2007-2015, 2021-now) and majority leader (2015-2021).

However, the makeup of the Senate after the election could threaten that position: Several Republican candidates have earned Trump’s primary endorsement by vowing to vote against McConnell as leader if elected.

“If you’re anti-Mitch, your numbers go up,” Steven Cheung, an advisor to Eric Greitens, the former Missouri governor now running for Senate, told Axios last year. “It’s a test for how Trumpian you are.”

And that could put McConnell in a very unfamiliar position come January 2023: just another senator, lobbying for his committee assignments.

But that, at least, is one position Trump can’t threaten… for now. McConnell was just re-elected to another six-year term in the Senate. His term will end in 2026, when he would be 84 years old… and Trump would be 80.