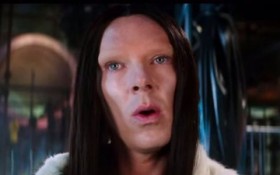 It seems everything is offensive these days. Paramount pictures release of the trailer for the upcoming Zoolander sequel this week caused an uproar among the political correctness police.

In the movie, actor Benedict Cumberbatch portrays a transgender model that has outraged many because his, “character is clearly portrayed as an over-the-top, cartoonish mockery of androgyne/trans/non-binary individuals. This is the modern equivalent of using blackface to represent a minority.”

A campaign was launched on Care2petitions to boycott the film and currently has over 11,000 signatures.

Cumberbatch’s brief appearance in the trailer includes a question regarding his gender and Owen Wilson’s character asks him if he has a, “hot dog or a bun.”