Liberal lawmaker starts CRYING when he says... - The Horn News 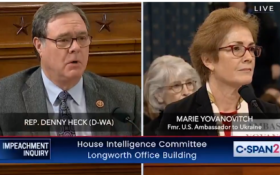 Fox News’ Sean Hannity predicted that the U.S. former Ukraine ambassador, Marie Yovanovitch, would cry “on cue” during her Friday testimony in the ongoing impeachment inquiry.

But it turned out Hannity was wrong — Yovanovitch never cried.

It was a liberal lawmaker that shed tears for the camera.

Rep. Denny Heck, D-W.A., broke down sobbing during his questioning of Yovanovitch.

Forget the fact that Yovanovitch was brought before Congress to answer questions from the House Intelligence Committee.

Heck spent his time otherwise, fawning over the former U.S. ambassador to Ukraine and apologizing to her.

“I’m very angry about how it is that the most powerful person on the face of the Earth would remove you from office after your stellar service and somehow feel compelled to characterize you as ‘bad news’ and then to ominously threaten that you’re ‘going to go through some things,'” Heck said.

He then transitioned into talking about the departed former Sen. John McCain, the Vietnam War, and a number of other topics of which had nothing to do with the impeachment hearing, least of all, Yovanovitch.

And by the time had gotten around to Yovanovitch, he spent his time telling the former U.S. ambassador to Ukraine that she was of great service to the nation.

You can watch a video of the sideshow below:

"You're the best of this nation." – Rep. Denny Heck #ImpeachmentHearings pic.twitter.com/ECpVhBgHMd