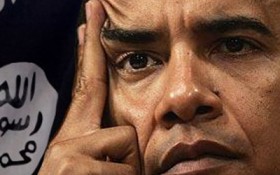 For years, Democrats and the mainstream media called for the impeachment of President George W. Bush over accusations that his administration used faulty intelligence to justify the war in Iraq.

But it now appears that President Barack Obama’s administration is being swept up in an intelligence scandal of a much larger scale.

An investigation has revealed that the Obama administration may have repeatedly used faulty intelligence in an effort to mislead the American public about our armed forces’ progress against the Islamic State and in winning the War on Terror.

The revelation came Thursday, when it was reported that personnel at U.S. Central Command have deleted countless files and emails amid continuing allegations that intelligence assessments were altered to exaggerate progress against ISIS militants, according to the chairman of the House Intelligence Committee.

“We have been made aware that both files and emails have been deleted by personnel at CENTCOM and we expect that the Department of Defense will provide these and all other relevant documents to the committee,” Rep. Devin Nunes said at a hearing on worldwide threats facing the United States. Central Command oversees U.S. military activities in the Middle East.

A whistleblower whose position was not disclosed told the committee that material was deleted, according to a committee staff member who spoke on condition of anonymity because he was not authorized to publicly disclose the information.

President Obama has been repeatedly accused of painting an overly rosy picture of America’s standing in the War on Terror — and his assessments are often directly contradicted by soldiers on the ground.

And it appears that CENTCOM analysts were under constant political pressure to make things appear to be going better than they were.

A survey issued last year indicated that 40 percent of responding CENTCOM employees answered “yes” to the question: “During the past year, do you believe that anyone attempted to distort or suppress analysis on which you were working in the face of persuasive evidence?”

The New York Times, which first disclosed the investigation, reported that the probe began after at least one civilian analyst told authorities he had evidence that officials at CENTCOM were improperly reworking conclusions of assessments prepared for President Obama and other top policymakers.

Critics say that could imply an impeachable offense, should it be found that Obama was pressuring changes to intelligence reports in order to lie to the American people.

At best, the Obama administration has created a culture of fear so deeply ingrained in the U.S. intelligence community that analysts are feeling continually compelled to fill their reports with misinformation in order to keep the White House happy.