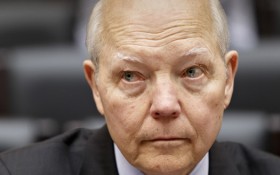 A powerful House committee has moved to impeach the head of the Internal Revenue Service, saying he violated the public trust and illegally targeted conservative groups.

After two years of investigation into the IRS, Republicans have finally had enough.

The first will be held May 24, where the Judiciary Committee will go over the results of the oversight committee’s investigation into Koskinen. Koskinen himself will be invited in to testify.

In the second hearing, lawmakers will call for third-party experts to give advice on whether or not the impeachment of Koskinen is justified.

Rep. Bob Goodlatte, who chairs the committee, said in a statement Friday, “The fact that officials at the IRS wielded their power to target certain Americans for their political views is both outrageous and contrary to our nation’s values.”

Goodlatte continued, “Despite repeated congressional efforts to get to the bottom of this matter, Obama Administration officials, including the IRS Commissioner, have consistently undermined the investigation. Over the coming weeks, the House Judiciary Committee will closely examine Commissioner Koskinen’s misconduct and the implications of his actions.”

According to a report from POLITICO, leading GOP members in the House have been discussing impeaching Koskinen for over a year.

Previously, House Oversight Chairman Jason Chaffetz called impeachment an appropriate tool to restore public confidence in the IRS and “demonstrate to the American people that the IRS is under repair.”