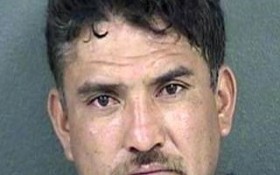 Authorities have announced the end to a massive, multi-state manhunt for an illegal immigrant police say was responsible for a killing spree that claimed five lives.

Now, critics are blaming a weak border policy for the suspect being in the country in the first place after reports surfaced that he’d been deported in 2004… and was arrested for domestic violence last year, but escaped a second deportation.

Serrano was arrested for alleged domestic violence in Wyandotte County back in June 2015. Unknown if went to court pic.twitter.com/njZ7lGlfJA

Immigration Customs Enforcement say they attempted to flag Serrano-Vitorino for detention and deportation, but an apparent error let him walk free.

Serrano-Vitorino, who police say fatally shot four people Monday at his neighbor’s home in Kansas before killing another man about 170 miles away in a rural Missouri house, was taken into custody early Wednesday morning after the extensive manhunt, the Missouri Highway Patrol said.

The Highway Patrol told the Kansas City Star that Serrano-Vitorino was arrested in Montgomery County, Missouri. The suspect was found lying on a hill just north of Interstate 70 and no shots were fired, the newspaper reported.

The manhunt for him that included helicopters, police dogs and at least one SWAT team began late Monday after the first shooting. One of the four men managed to call police before he died, but it’s unclear how the men knew each other or what may have prompted the shooting, Kansas City police officer Thomas Tomasic said.

The manhunt shifted Tuesday, when a truck Serrano-Vitorino was believed to be driving was found about 7 a.m. abandoned along I-70 in central Missouri, about 80 miles west of St. Louis.

About 25 minutes later, sheriff’s deputies responded to a shooting about 5 miles away at a Montgomery County home and found the body of a 49-year-old man, according to the patrol.

U.S. Immigration and Customs Enforcement said in a statement Tuesday night that Serrano-Vitorino, of Mexico, had been deported from the U.S. in April 2004 and illegally re-entered “on an unknown date.” ICE said it would place a detainer on Serrano-Vitorino if he is taken into custody.