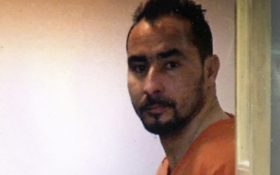 Prosecutors on Wednesday charged an immigrant illegally living in the U.S. in a drunken-driving crash that killed Indianapolis Colts linebacker Edwin Jackson and his Uber driver in Indiana.

Manuel Orrego-Savala, 37, was charged with four felony counts related to the Sunday crash along Interstate 70 in Indianapolis. The citizen from Guatemala was due in court later Wednesday for an initial hearing on the charges: causing death while driving intoxicated and leaving the scene of an accident.

Orrego-Savala was deported in 2007 and 2009, and was again living illegally in the U.S. at the time of the crash, according to investigators. A federal immigration charge was filed against him Tuesday.

Orrego-Savala, 37, was arrested following the crash along Interstate 70. Investigators said Jackson, 26, and his Uber driver, 54-year-old Jeffrey Monroe, were standing outside Monroe’s car when they were struck and killed by a pickup truck driven by Orrego-Savala.

He was charged in Tuesday’s federal criminal complaint with illegal re-entry of a previously deported alien. He faces up to 10 years in prison on the immigration charge, which the U.S. attorney’s office said would be handled after any state charges are resolved.

President Donald Trump drew added attention to the case on Twitter, calling the highway collision that killed Jackson and Monroe “disgraceful.” The president also prodded Democrats to work with him on illegal immigration and border security.

A spokesman for Jackson’s family has said his relatives are devastated and planned no response to Trump’s tweets about the crash and the suspect’s immigration status.

“The family is in shock, as you can imagine. This obviously happened so unexpectedly,” Atlanta attorney Daniel Meachum said.

Investigators said they believe Orrego-Savala was intoxicated at the time of the Indiana crash.

Orrego-Savala had a 2005 conviction for driving under the influence in Redwood City, California. He also has numerous other misdemeanor convictions and arrests in California and Indiana, according to U.S. Immigration and Customs Enforcement spokeswoman Nicole Alberico.

In the 2005 case, he pleaded no contest to two separate drunken-driving offenses and was given a brief jail sentence, San Mateo County District Attorney Steve Wagstaffe said Tuesday.

Orrego-Savala remains jailed in Indianapolis. Federal prosecutors spell his name as Orrego-Zavala, but the federal criminal compliant lists “Orrego-Savala” as among his aliases.

He appeared Tuesday before a judge who advised him of his rights. Indianapolis television station WRTV reported that Orrego-Savala told the judge through an interpreter: “I wasn’t driving the car. I don’t know why I am here.”

A police news release did not mention the presence of anyone else in the pickup truck.