If neither candidate reaches 270 electoral votes, here's what happens - The Horn News 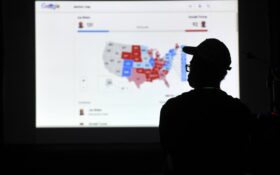 The election is far from over.

President Donald Trump and Democratic contender Joe Biden have run their campaigns down to the wire and experts across the country say that this thing could be decided by merely thousands of votes.

So much for a Biden landslide…

As of Wednesday morning, it remains neck and neck.

Well, election experts say that the next course of action is clear, but that doesn’t mean the process is simple.

According to The New York Post, if 270 isn’t reached by either candidate then the proceedings would go to the House of Representatives.

In the House, the presidential race would go down to a vote among 50 state delegates, not a straight vote. Each state would get one House representative.

A majority is needed — 26 votes for either Trump or Biden. Republicans control the majority of states (but not seats) so that would favor the Republican incumbent.

Should a scenario come down to Congress, there’s very little indication that the process would go smoothly given that lawmakers on Capitol Hill have rarely been able to agree on anything ever since Trump took office.