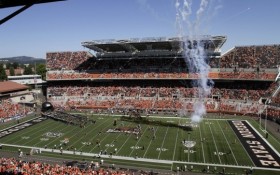 Construction workers have unearthed the bones of a mammoth and other ice age mammals on the Oregon State University football field.

The Oregonian reports crews working on an expansion around Reser Stadium found a femur from one of the ancient elephants and bones from a bison and camel, all dating back 10,000 years.

A spokesman says the OSU archaeologist believes the 10-foot pit where the remains were found could have been a pond or watering hole.

Davis says the find isn’t unusual since thousands of mammoths and other long-gone creatures once roamed the surrounding Willamette Valley.

Construction work has been moved elsewhere while experts examine the bones.