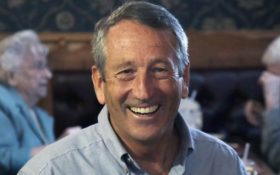 Mark Sanford dropped his challenge to President Donald Trump for the Republican presidential nomination on Tuesday, saying the focus on impeachment has made it impossible for his campaign to gain traction.

“You’ve got to be a realist,” Sanford said outside the New Hampshire statehouse.

“What I did not anticipate is an impeachment.”

The former South Carolina governor and congressman announced his decision to suspend his campaign on the eve of televised impeachment hearings in the U.S. House. He centered his campaign on warnings about the national debt, but said Republicans were more interested in defending Trump from the threat of impeachment.

“It was a longshot, but we wanted to try and interject this issue, how much we’re spending, into the national debate which comes along once every four years,” Sanford said. “I don’t think on the Republican side there is any appetite for a nuanced conversation on issues when there’s an impeachment overhead.”

Impeachment aside, Sanford’s campaign faced other hurdles as a handful of state parties canceled their primaries and other nominating contests, including in Sanford’s home state of South Carolina.

Sanford’s decision to end his run comes little more than a week after he moved his campaign’s “home base” to New Hampshire.