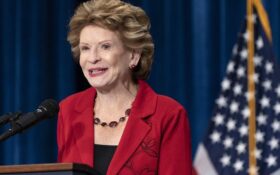 Michigan Sen. Debbie Stabenow, a member of the Democratic leadership, announced Thursday she’s resigning her office at the end of her term. Her announcement that she will not run for a fifth term in 2024 was a surprise decision that opens up a seat in the key battleground state.

2024 was already looking like a difficult year for Senate Democrats nationwide. That year, the Senate Democrats will be trying to preserve their 51-49 majority by defending incumbents in Republican-leaning states like Ohio, Montana and West Virginia.

Plus, the Democrats also need to defend a first-term incumbent in Nevada, a swing state, and they’ll need to avoid a messy, three-person race in their possible campaign to unseat former Sen. Kyrsten Sinema, I-Ariz.

Stabenow just made 2024 even more difficult by vacating her swing-state seat in the Senate.

Some Democrats have been downplaying the difficulty of winning this race. They’ve been showing the kind of overconfidence not seen since 2016.

“It seems that Stabenow wants someone young (and probably a woman) to replace her, [assuming] she hasn’t already hand picked a successor,” one Michigan Democrat wrote on Twitter. “I doubt there’d be a crowded primary.”

Another person said, “Stabenow looked at the midterm results and decided, yep, the kids have got this.”

Senate Democrat Leader Chuck Schumer has expressed this kind of overconfidence himself. “With Debbie’s help, and the strong Michigan Democratic Party she helped build, Debbie and I are confident Democrats will retain the seat,” Schumer said in a statement obtained by Politico.

Still, the news shocked many Democrats in the state because the 72-year-old Stabenow had not previously indicated that she would not seek reelection.

“Inspired by a new generation of leaders, I have decided to pass the torch in the U.S. Senate. I am announcing today that I will not seek reelection and will leave the U.S. Senate at the end of my term on January 3, 2025,” Stabenow said in a statement.

Democrats will face a test to find a candidate with Stabenow’s broad support. On the GOP side, the National Republican Senatorial Committee, which works to elect Republicans, said in a statement after Stabenow’s announcement that it would “aggressively target this seat in 2024.”

“Senate Democrats don’t even have a campaign chair yet and they are already dealing with a major retirement,” National Republican Senatorial Committee communications director Mike Berg said in a statement. “This could be the first of many Senate Democrats who decide to retire rather than lose.”

Only one Michigan Republican has held a seat in the Senate in the past 40 years, and the current political climate in Michigan favors Democrats following a midterm election where they flipped the state House and Senate.

However, the state is still expected to be one of the nation’s premier battlegrounds in the 2024 presidential election.

Schumer may be downplaying the difficulty of winning Michigan, but the Senate Democrats are already scrambling to replace Stabenow, nearly two years ahead of the election.

Among the Democrats whose names began circulating after Stabenow’s announcement are Pete Buttigieg, the federal transportation secretary who ran for president in 2020 and moved from Indiana to northern Michigan last year to be closer to his husband’s family; Elissa Slotkin, a congresswoman first elected in 2018 and coming off a decisive victory in November in one of the country’s most competitive House districts; and state Sen. Mallory McMorrow, who has seen her profile rise since going viral with a speech denouncing Republicans over “grooming” accusations.

Buttigieg said in a statement that he was “fully focused” on his Cabinet post and was “not seeking any other job.”

Democratic Gov. Gretchen Whitmer, who has been mentioned as a possible future White House candidate and was just sworn in Sunday for a second term, issued a statement in which she ruled out a potential Senate run and reaffirmed that she would stay in office for the next four years.

On the Republican side, names that surfaced include John James, who was elected to Congress in November after losing Senate races to Stabenow in 2018 and Democrat Gary Peters in 2020; Tom Barrett, a former state representative defeated by Slotkin last year; and former Rep. Fred Upton, the longest-serving member of the congressional delegation before he decided not to run in 2022 after voting to impeach then-President Donald Trump over the Capitol riot.

Candice Miller, a former congresswoman and Michigan secretary of state, is “seriously considering” a bid, according to former chief of staff Jamie Roe.

Stabenow joined Congress in 1996 after serving in the Michigan Legislature. In 2000, she made history by becoming the first woman to be elected senator in Michigan, defeating one-term Republican Sen. Spence Abraham. She turned back GOP challenges in 2006 and 2012 and defeated James by 6.5 percentage points in her last election in 2018.

Stabenow is the longest-serving member of the state’s congressional delegation. She is chair of the Democratic Policy and Communications Committee, making her the No. 3 ranking party leader, and heads the Senate Agriculture, Nutrition and Forestry Committee.

Stabenow most recently has been involved in bipartisan legislation aimed at increasing oversight of cryptocurrencies. She has also led efforts to expand and increase funding for mental health care both nationally and in Michigan.

Praise for Stabenow began pouring in after her retirement announcement.

Democratic Gary Peters, the state’s junior senator who has served with Stabenow since 2015, said she would leave a legacy “as a champion for children, women and families, workers, manufacturing and our auto industry, mental health care and the Great Lakes.”

Buttigieg said Stabenow was “a force in the Senate” while McMorrow called her a “trailblazer.”

“No one has been more instrumental in building the infrastructure of the Michigan Democratic Party to this historic moment we’re in today,” McMorrow said.