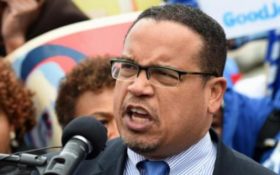 Another top politician has been caught up in allegations of abuse… and once again, many of his colleagues are being completely SILENT on the matter.

Minnesota Rep. Keith Ellison, deputy chairman of the Democratic National Committee and candidate for attorney general in Minnesota, is being accused of being physically abusive toward environmental activist Karen Monahan, who he was dating at the time.

He claimed Ellison put his mother through “pure hell.”

Ellison denied being abusive and insisted that no such video exists.

Karen Monahan, however, confirmed her son’s account, recounting an argument with the congressman that turned violent.

So far, no such video has surfaced. Still, in a lengthy statement to Fox 9 Minneapolis, Monahan said Ellison had “rage that I had never witnessed to that magnitude” and said his “narcissistic abuse” was so traumatizing she now has PTSD.

“The pathological lying, cheating, smearing my name and seeking validation and sympathy from the various females he was preying on, kept getting more and more frequent,” she wrote.

The allegations are outrageous. If nothing else, they warrant a deep investigation – yet the same liberal politicians celebrating the pro-women “me too” and “times up” movements have been largely silent.

They’ve been protecting their party and Ellison’s campaign.

Democratic Gov. Mark Dayton even said he had “no reservations” about endorsing Ellison for the office despite the explosive accusations!

Local party chairman Ken Martin admitted there are “questions out there that need to be answered,” according to the Star-Tribune newspaper.

But he also gave a full-throttled endorsement nonetheless.

“Keith is our nominee,” he said. “We support him.”

While every man is innocent until proven guilty, imagine the howls of protest from the left if similar accusations were made against a Republican as GOP leaders offered similar comments.

Actually, you don’t have to imagine.

Just look at what’s happened to conservative figures when even a hint of an accusations surfaces, including the unproven rumors against President Donald Trump.

It’s more proof they only want the heads to roll when it helps their agenda… but there’s at least one crack in the armor.

The progressive group NOW is turning on Ellison.

“Keith Ellison must withdraw from the race and not put Minnesotans through another cycle of political scandal,” NOW President Toni Van Pelt said in the statement. “They’ve been through enough.”

So far, there’s no sign he’s going to step aside.

In fact, he had the nerve to call on his accuser to stop trying to “destroy” him in a statement that some might think included a thinly veiled threat that she could be destroyed, too.

The WCCO television station in Minneapolis asked him what he would say to her if the two spoke today.

“I’d say, ‘Look, we loved each other, we don’t have to destroy each other,’” he said, implying that she was trying to “destroy” him rather than seek justice.

Asked what he meant by that word, Ellison wouldn’t elaborate.

As for the “each other” part and the implication that he might “destroy” his accuser? He didn’t elaborate on that, either.