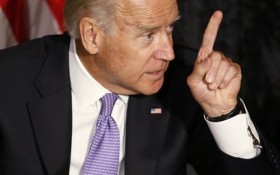 Former Vice President Joe Biden has long dreamed about becoming the commander-in-chief and having his name on the Resolute Desk in the Oval Office.

After two failed presidential runs in 1988 and 2008, Biden is finally the early favorite to secure the 2020 Democratic presidential nomination.

While Biden is clearly the frontrunner right now, his 2020 campaign could be derailed in the primaries — if the mainstream media had the courage to point out that the former VP has a long history of flip-flopping on critical issues and policies.

Here are the top 5 Biden flip-flops:

As noted by Townhall, Biden told an ACLU volunteer in South Carolina that the Hyde Amendment “can’t stay.”

Then, his campaign changed course after backlash and said Biden still supported the amendment.

The campaign then flipped again following criticism from the far Left, and now contends he is against the Hyde Amendment and would repeal it as president.

During a campaign stop back in April, Biden mocked Trump for calling China the greatest threat facing the United States.

“China is going to eat our lunch? Come on, man,” Biden mockingly said.

“I mean, you know, they’re not bad folks, folks. But guess what? They’re not, they’re not competition for us,” Biden said at the time, according to the New York Post.

After he either realized how wrong he was or someone convinced him to change his position, Biden flip-flopped last month and essentially admitted that Trump is correct about China.

“We are in competition with China. We need to get tough with China. They are a serious challenge to us, and in some areas a real threat,” Biden told an Iowa audience while on the campaign trail.

“As I know you know, but others should know, too, I truly enjoyed working with you when you were attorney general,” Biden said to Barr, who had previously served under former President George H.W. Bush.

“You were one of the best I have ever worked with,” Biden said. “And there have been a lot of attorneys general since I have been here. I mean that sincerely.”

But soon after Barr was nominated by Trump and has been making big moves at the Department of Justice to expose potential corruption under former President Barack Obama and the Russia witch hunt, Biden changed his tune.

Now that he’s running for president, Biden has different things to say about Barr.

While speaking to reporters earlier this month, Biden called on Barr to resign.

He didn’t provide a reason, but it’s clear he’s just following orders from his liberal comrades.

In June 2012, just months before the presidential election, Biden shifted positions – a move that was likely political to help Obama win his second term in office – and slightly offered his support for same-sex marriage even though Obama had not endorsed it publicly himself.

Now, he’s not just pro-gay marriage — Biden has gone so far to say that the movement for transgender rights is the “civil rights issue of our time.”

In 1986, Biden voted with the National Rifle Association on a bill called the “Firearms Owners’ Protection Act,” which the nation’s largest pro-gun organization called “the law that saved gun rights” because it rolled back overreaching government regulations.

In fact, left-leaning NBC News notes that Biden was key to the law’s passage at the time.

However, Biden changed his tune in the 1990s and began backing aggressive gun control laws when he was a U.S. senator.

Even today, Biden has ensured liberal voters that gun control measures are a top issue for his 2020 campaign.

When voters across the country find out what Biden really thinks and how he only endorses ideas that liberals have deemed popular, his third run at the presidency may come crashing down.