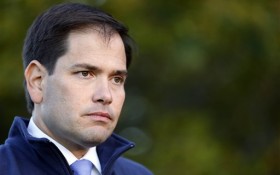 His poll numbers have crept up since the last Republican debate, and many are wondering who is paying for it.

Money has flowed to the Rubio campaign out of a mysterious, anonymous nonprofit group funded by unnamed donors. And this secret-money group appears to have an unknown relationship with Rubio.

Not a single pro-Rubio television commercial so far in the early primary states of Iowa, New Hampshire and South Carolina has been paid for by the Rubio campaign. Even more strange, the Rubio super PAC that identifies its donors hasn’t run a single commerical either.

It’s all being run by the shadowy Conservative Solutions Project.

This secret-money Conservative Solutions Project is happily picking up the tab for critical expenses that Rubio might struggle to afford.

This secret-money group is giving Rubio at least an $8 million assist, according to advertising tracker Kantar Media’s CMAG.

The candidate has previously presented himself as being opposed to such unaccountable money.

“I have always supported disclosure,” Rubio said at a New Hampshire campaign stop last month, in response to a question about money in politics. “And I think that as long as people know who is giving you money, and why it is, people can make judgments on why you are doing what you are doing.”

However, the Conservative Solutions Project does not disclose its donors.

The group is spending more than $3 million on a commercial that shows Rubio, 44, speaking at the Iowa State Fair, according to CMAG information about advertising placements on broadcast, cable and satellite television.

That follows a $3 million summertime ad campaign by the same group that promoted Rubio’s strong opposition to the Iran nuclear deal. Conservative Solutions Project also has reserved nearly $2 million in additional satellite TV time through Feb. 16, according to the advertising tracker.

The Conservative Solutions Project continues to decline to say who gave it the $16 million it claims to have. Its donors will never be named in the IRS paperwork it is required to submit. And because of the filing schedule the group set for itself, the public will have to wait until mid-2017, well after the general election, to learn even basic information about its finances during the primary nomination fight.