Hundreds turn out to support cop killer - The Horn News 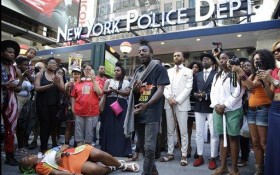 “Rise up!” was the message a mass of anti-cop protesters wanted to send to New Yorkers yesterday, just two days after the tragic slaying of New York Police Department Officer Randolph Holder by a career criminal.

Activists and family members of those killed by police rallied Thursday in Times Square, the start of three days of protests and marches speaking out against violence at the hands of law enforcement.

While the rally was planned beforehand, many New Yorkers were left furious by the timing, claiming it gave the appearance of support for repeat felon Tyrone Howard, who allegedly brutally gunned down Holder on Tuesday.

While Holder’s death has created a nationwide wave of support for police officers, the protest organizers decided to go forward with their anti-cop message anyway.

“We need to put an end to police brutality and police murder,” speaker Nicholas Heyward Sr. told the crowd.

He continued, “We are talking about innocent lives that are being taken constantly and they never, never are being held accountable for the crimes they are committing.”

Just this summer Howard, the accused cop killer, had been released from jail into a drug diversion program and was wanted in a shooting last month, said Police Commissioner William Bratton, noting that the suspect had shown an increasing level of violence and shouldn’t have been on the streets.

Howard is expected to be charged with fatally shooting Holder during a gunfight Tuesday night on a pedestrian bridge after stealing a bike.

He was arrested in October 2014 along with 18 other people and charged with selling crack cocaine at an East Harlem public housing complex. But Bratton said Howard was released into a drug diversion program, which is meant to keep drug offenders from overcrowding the city’s jails.

Mayor Bill de Blasio said Holder, who joined the force in July 2010, had an “exemplary record” as a police officer.

Holder was a native of Guyana. He worked in the NYPD division that polices the city’s public housing developments. His father and grandfather were police officers in Guyana, Bratton said.

The anti-cop RiseUpOctober events were the brainchild of activist Carl Dix and academic Cornel West, and are scheduled to continue for three-days before culminating on Saturday with a march in Manhattan.