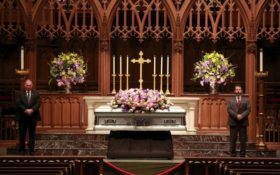 A spray of flowers covered the closed silver casket of former first lady Barbara Bush in the sanctuary of the Houston church as mourners waited Friday to pay their final respects.

Lucy Orlando was one of the more than 100 people in line 90 minutes before bus service began, travelling from Weston, Florida, to pay her respects. Originally from Haiti, the 74-year-old Orlando said has admired Barbara Bush for many years, including her work in promoting literacy.

“She was a very sweet lady and she loves people,” said Orlando, who was carrying a gray suitcase containing framed photos of the couple and members of their family, including former Florida Gov. Jeb Bush and former President George W. Bush and his wife, Laura.

“This woman dedicated her life to educating children,” said the 49-year-old Johnson, who is originally from Liberia.

He said he also wanted to thank her son, George W. Bush, for work during his presidency to help his home country.

A hearse containing the former first lady’s casket arrived before daybreak at the Houston church, which is the nation’s largest Episcopal church. Her body was to be in repose from noon until midnight.

An invitation-only funeral is set for Saturday. She will be buried later in the day behind her husband’s presidential library at Texas A&M University in a gated plot surrounded by trees and near a creek where the couple’s 3-year-old daughter, Robin, is buried. She died of leukemia in 1953.