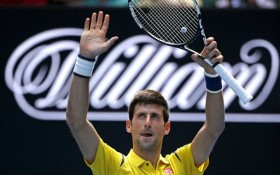 Foul, indeed. Reports of corruption and gangsters have shaken up the sports world after multiple news agencies broke stories of widespread match fixing in international tennis tournaments — including some at the prestigious Wimbleton tournament.

Now, some of tennis’ top players are calling for heads to roll. Others loudly wonder if the sports integrity can ever be recovered.

The start of the year’s first Grand Slam tournament, the Australian Open, was overshadowed by the corruption allegations on Monday.

Two mainstream media entities, the BBC and Buzzfeed News, first published these reports, which allege match-fixing had gone unchecked in tennis for over a decade.

No players were identified in the reports, which alleged 16 players had been flagged repeatedly by tennis authorities but not sanctioned on suspicion of match fixing. Half of those are entered in the Australian Open, the reports said.

In a recent interview with the Associated Press, top player Novak Djokovic recalled his own brush with match-fixing. “I was approached through people that were working with me at that time, that were with my team,” he said.

Djokovic was an up-and-coming player at the time, not winning the first of his 10 major titles until the 2008 Australian Open.

“It made me feel terrible because I don’t want to be anyhow linked to this kind of — you know, somebody may call it an opportunity,” he said. “For me, that’s an act of unsportsmanship, a crime in sport honestly. I think there is no room for it in any sport, especially in tennis.”

Roger Federer, a 17-time major winner and former leader of the player council, agreed the allegations were “super serious.”

“I would love to hear names,” Federer said. “Then at least it’s concrete stuff and you can actually debate about it. Was it the player? Was it the support team? Who was it? Was it before? Was it a doubles player, a singles player? Which slam?

“It’s super serious and it’s super important to maintain the integrity of our sport. So how high up does it go? The higher it goes, the more surprised I would be, no doubt about it.”

The original report can be found here.