How Trump can save the Post Office - The Horn News 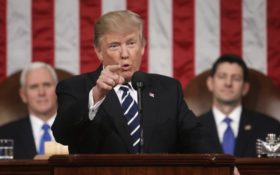 The struggling agency – teetering on the brink of financial ruin – might have a golden opportunity to fix everything, just as Trump has been urging.

The Teamsters said more than 90 percent of its UPS workers voted to authorize a strike in a rapidly escalating labor dispute that could come to a head when their contract expires on Aug. 1.

UPS has an overall workforce of 335,000 workers, making it one of the nation’s biggest employers.

The lion’s share of those workers – more than a quarter of a million of them – are Teamsters.

If they strike, it would be the biggest labor action in the nation since 1997, when nearly 200,000 Teamsters walked off the job at UPS for more than two weeks.

Amazon was just a fledgling little bookseller in the then-nascent world of e-commerce at the time.

Today, of course, it sells just about everything, shipping much of it around the country in two days or less.

A UPS strike could cripple Amazon, and it would no doubt be brutal for consumers who have come to depend on speedy deliveries of everything from movies to medicine (not the mention all the knickknacks, doodads and gewgaws people are constantly shipping each other as last-minute birthday and anniversary gifts).

Amazon would have no choice to shift a massive amount of its packages to other carriers, especially the USPS.

And for once, the Post Office would be in the driver’s seat, as the author of the “Art of the Deal” no doubt knows.

Maybe he even saw this coming earlier this year, when he fired off a series of tweets urging the USPS to renegotiate its deal with Amazon, such as this one:

I have stated my concerns with Amazon long before the Election. Unlike others, they pay little or no taxes to state & local governments, use our Postal System as their Delivery Boy (causing tremendous loss to the U.S.), and are putting many thousands of retailers out of business!

He might’ve also seen in coming in spring, when he signed an executive order to investigate USPS’s financial struggles.

“The USPS is on an unsustainable financial path and must be restructured to prevent a taxpayer-funded bailout,” he wrote, urging it to look into “the expansion and pricing of the package delivery market and the USPS’s role in competitive markets.”

As Trump noted, the agency has lost $65 billion in about a decade.

Raising rates on Amazon would go a long way toward filling that hole.

Trump has even reportedly pushed the USPS behind the scenes to double its fees to Amazon and other big retailers.

It’s a huge price increase, but the agency would still be competitive: The Wall Street Journal reported earlier this year that USPS rates to these companies are often half what UPS and FedEx charge.

Critics note that Amazon is developing its own delivery network and is already using it in some locations. If USPS rates jump too high, that service could quickly expand, they warn.

But Amazon is already creating this system right now, even with favorable rates from the USPS. And in addition to delivering its own packages, early reports indicate it might make deliveries for other companies as well.

Not only will Amazon pay LESS to UPS, USPS, FedEx and more as it needs them less, but it will be swiping business out from under all of them… costing all of them billions.

They could do the delivery companies what they’ve done to thousands of brick-and-mortar retailers and drive them right out of business.

In other words, if you want to get more from Amazon for package delivery, this just might be the last chance.

It’s the art of the deal!