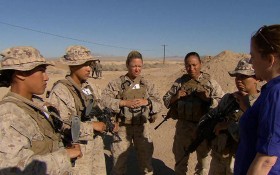 Women would be required to register for the military draft under a House committee bill that comes just months after the Defense Department lifted all gender-based restrictions on front-line combat units.

A divided Armed Services Committee backed the provision in a sweeping defense policy bill that the full House will consider next month, touching off a provocative debate about the role of women in the military. The panel also turned aside a measure backed by Democrats to punish the Citadel military college in South Carolina for flying the Confederate flag.

The United States has not had a military draft since 1973 in the Vietnam War era, but all men must register with the Selective Service Systems within 30 days of turning 18. Military leaders maintain that the all-volunteer force is working and the nation is not returning to the draft.

The 32-30 vote Wednesday night came with a twist: The proposal’s author didn’t back it, a clear sign that more contentious debate is ahead.

Rep. Duncan Hunter, a former Marine who served three combat tours in Iraq and Afghanistan, does not support drafting women into combat and opposes opening infantry and special operations positions to women. Hunter, R-Calif., said he offered the measure in the House Armed Services Committee to prompt a discussion about how the Pentagon’s decision in December to rescind gender restrictions on military service failed to consider whether the exclusion on drafting women also should be lifted.

That’s a call for Congress, not the executive branch, Hunter said. “I think we should make this decision,” he said. “It’s the families that we represent who are affected by this.”

At times, Hunter evoked graphic images of combat in an apparent attempt to convince colleagues that drafting women would lead to them being sent directly into harm’s way.

But if Hunter was trying to sway people against his amendment, his plan did not work.

Rep. Jackie Speier, D-Calif., said she supported Hunter’s measure. “I actually think if we want equality in this country, if we want women to be treated precisely like men are treated and that they should not be discriminated against, we should be willing to support a universal conscription,” she said.

Rep. Martha McSally, R-Ariz. and a retired Air Force fighter pilot, said draftees aren’t exclusively sent to the front lines. There are plenty of other useful, noncombat positions for them to fill, she said.

If an 18-year-old man does not register with the Selective Service he could lose his eligibility for student financial aid, job training and government jobs. Immigrant men could lose their eligibility for U.S. citizenship. According to the latest annual report, 73 percent of 18-year-olds registered on time during the 2015 fiscal year ending last Sept. 30. And the registration rate for all men aged 20-25 was 94 percent.

Hunter’s amendment was part of a defense policy bill that authorizes defense spending for the budget year that begins Oct. 1. The committee passed the legislation by a 60-2 vote early Thursday.

The overall bill cuts $18 billion from the wartime operations account to pay for weapons and troops the Pentagon didn’t request, a money-shifting strategy Defense Secretary Ash Carter condemned as a “road to nowhere” that undermines U.S. troops and emboldens America’s enemies.

Rep. Mac Thornberry, R-Texas, the committee’s chairman, defended the plan and said the billions of dollars shifted out of the wartime fund would be restored in a supplemental budget submitted to Congress early next year by President Barack Obama’s successor. He’s argued the committee’s approach is essential to halting an erosion of combat readiness.

On another thorny policy issue, Rep. Adam Smith of Washington, the committee’s senior Democrat, offered an amendment that would have barred the Defense Department from financially supporting the ROTC program at any institution that flies the Confederate battle flag.

The Citadel is the only school that fits the profile. The college is in South Carolina Rep. John Clyburn’s district. He’s not on the committee, but he backed Smith’s measure in a statement Wednesday, calling the Confederate flag a symbol of hate, racial oppression, and resistance to the rule of law.

The college’s Board of Visitors has voted to remove the flag, but South Carolina state law prohibits them from doing so.

“This failure to take down the Confederate battle flag is an extremely disappointing statement of principles,” Smith said. “They should have voted to take it down instead of dodging the issue.”

The overall bill authorizes $602 billion in defense spending for the fiscal year that begins Oct. 1.