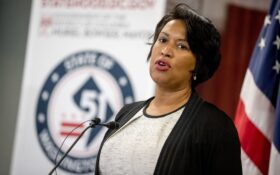 Democrats controlling the House have slated a vote next week to make the District of Columbia the 51st state, an issue that they say has become far more important in the aftermath of protests for racial justice in both Washington and across the nation.

Next Friday’s vote, if successful, would pass a D.C. statehood bill for the first time in the House, but the legislation faces insurmountable opposition in the GOP-controlled Senate. It comes even as the COVID-19 pandemic has forced delays in the consideration of most other legislation. More than enough lawmakers are officially backing the bill for it to pass. In 1993, the Democratic-controlled Congress defeated a D.C. statehood bill by an almost 2-1 margin.

But the much-criticized administration move to use federal forces to clear Lafayette Square near the White House of peaceful protesters to enable President Donald Trump to trumpet his law and order credentials in a photo op two weeks ago prompted Democratic leaders to schedule the vote. “We both agreed this was an appropriate time to bring a bill forward to show respect for the citizens of the District of Columbia,” said Majority Leader Steny Hoyer.

“There shouldn’t be troops from other states in Washington, D.C.,” said Mayor Muriel Bowser, who presented Hoyer on Tuesday with a U.S. Flag bearing 51 stars. “There shouldn’t be federal forces advancing against Americans, and there very definitely shouldn’t be soldiers stationed around our city waiting for the go to attack Americans in a local policing matter.”

A plurality of the District of Columbia is African American and the city is overwhelmingly Democratic. Trump said last month that “D.C. will never be a state” because it would likely mean two more Democratic senators. “No, thank you. That’ll never happen,” he told the New York Post.

But Hoyer said the rights of D.C. residents should transcend political calculations.

“This is not about politics. If it is, then we demean our democracy,” he said. “This is about who we are as a country.”

Bowser pointed out that D.C. taxpayers get no voting representatives in Congress despite contributing more in federal taxes on a per person basis than many states. The nation’s capital, with just over 700,000 residents, has a larger population than Vermont and Wyoming.

Bowser said recent events have focused national attention on the plight of Washington, D.C. Earlier this year, when Congress passed the CARES Act stimulus package, Washington, D.C., was classified as a territory rather than a state — a distinction that cost Washington more than $700 million in federal coronavirus relief funding.

All District laws are subject to review by a congressional committee, which can veto them or alter them by attaching riders to federal appropriations bills. During GOP control of Congress, conservatives have sought, mostly unsuccessfully, to restrict some of the city’s liberal initiatives such as needle exchanges for drug users and abortions under its Medicaid program.

Most recently, a 2014 ballot initiative to legalize recreational marijuana use passed overwhelmingly. But Congress stepped in and essentially vetoed the initiative by prohibiting the District government from spending any funds or resources on developing a regulatory or taxation system for marijuana sales.

As a result, Bowser said her office is now fielding unprecedented interest in the issue from around the country. She was recently interviewed on “The Late Late Show” where host James Cordon said he had only just learned that the district has no senators and only one non-voting delegate in the House of Representatives.

Hoyer acknowledged that the bill faces stiff opposition in the Republican-controlled Senate and called on Senate Majority Leader Mitch McConnell, R-KY., to take the measure seriously.

“I hope that Senator McConnell cares enough about our democracy to allow a vote on this bill in the United States Senate,” Hoyer said. “Politics is not the issue. It’s democracy that’s the issue.”