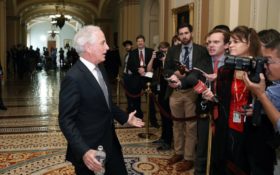 The House has officially passed the sweeping tax reform bill and it will now be voted on in the Senate.

The $1.5 trillion package would provide steep tax cuts for businesses and the wealthy and more modest cuts for middle- and low-income families. The business tax cuts would take effect in January. Workers would start to see changes in the amount of taxes withheld from their paychecks in February.

The bill would nearly double the standard deduction used by most taxpayers, which those who itemize would lose some deductions.

Police removed the demonstrators from the visitors’ gallery and debate proceeded, with Republicans and Democrats alternating in speaking about the $1.5 trillion package.

Several Democratic lawmakers applauded. The last protester escorted out of the gallery nodded toward the Democrats and said, “thank you.” Republicans did not applaud, but several could be seen smiling.