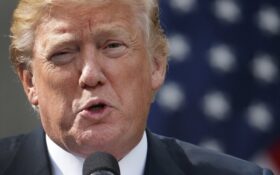 On Tuesday, the Democrat-led House Ways and Means Committee voted along party lines to release former President Donald Trump’s tax returns in the coming days, raising the potential of additional revelations related to the finances of the onetime businessman.

The vote was the culmination of a yearslong fight between Trump and Democrats that has played out everywhere from the campaign trail to the halls of Congress and the Supreme Court.

However, some Senate Democrats are worried their pursuit of Trump could backfire politically.

Democrats on the tax-writing Ways and Means Committee argued that transparency and the rule of law were at stake, while Republicans countered that the release would set a dangerous precedent with regard to the loss of privacy protections.

“Over our objections in opposition, Democrats in the Ways and Means Committee have unleashed a dangerous new political weapon that overturns decades of privacy protections,” he told reporters. “The era of political targeting, and of Congress’s enemies list, is back and every American, every American taxpayer, who may get on the wrong side of the majority in Congress is now at risk.”

“It is a very realistic concern, so there’s a risk,” Kaine reportedly said of a potential backlash. “But there’s also a risk of allowing bad behavior to go unpunished.”

However, Kaine still wanted to err on the side of pursuing Trump.

“When there’s bad behavior and there’s no consequence it tends to encourage more bad behavior,” Kaine reportedly continued. “In addition to just looking at the evidence, you have to weigh both of those.”

“There’s risk on both sides. What [Trump] would do in reaction to it, I can’t tell you. Our failure to acknowledge his role in this criminal activity would be an omission on our part,” Durbin reportedly said, referring to the Capitol riot.

“I think you should be careful about prosecuting former presidents. I think it’s ok to have a high bar when it comes to bringing charges against former chief executives. If there’s clear and convincing evidence then the Justice Department should proceed but they should be pretty careful about doing so,” Sen. Chris Murphy, D-Conn., said, according to The Hill.

The House can make a referral regarding criminal charges related to the Jan. 6 Capitol riot, but the Justice Department decides whether to charge, according to Democrat Sen. Richard Blumenthal of Connecticut.

Still, the House Jan. 6 committee voted on Monday to make a criminal referral to the Justice Department for Trump’s role in sparking the violent insurrection at the U.S. Capitol.

Trump has argued there is little to learn from his tax returns even as he has fought to keep them private.

“You can’t learn much from tax returns, but it is illegal to release them if they are not yours!” he complained on his social media network last weekend.

Take a look at the Ways and Means Committee’s vote —