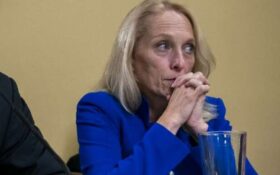 Rep. Mary Gay Scanlon, D-Pa., has become known as a vocal advocate for police reform, and she has called for cutting the scope of police work and spending more tax dollars on mental health professionals. Critics have labeled her a “Defund the Police” Democrat.

Then Scanlon was carjacked — at gunpoint — inside her Philadelphia district in broad daylight.

“On Wednesday afternoon, at around 2:45 p.m., Congresswoman Scanlon was carjacked at gunpoint in FDR Park following a meeting at that location,” her spokesperson Lauren Cox told CNN in a statement on Wednesday.

“The Congresswoman was physically unharmed. She thanks the Philadelphia Police Department for their swift response, and appreciates the efforts of both the Sergeant at Arms in D.C. and her local police department for coordinating with Philly PD to ensure her continued safety,” Cox wrote.

But Scanlon hasn’t always been thanking the police.

In 2020, Scanlon voted for the Justice in Policing Act. The bill would have stopped federal funding for police departments without body cameras. Despite this, body cameras may not actually change police behavior; the data remains unclear.

In February, she introduced the Mental Health Justice Act which seeks to reduce the scope of police work by offloading some services to mental health professionals — what many “Defund the Police” advocates have pushed for in the past year.

Scanlon claimed she doesn’t want to directly defund the police. Instead, in a statement about the legislation, she said: “For too long, the problems of people living with mental illness and disabilities have been ignored, and they have ended up in our criminal justice system — often with fatal consequences.”

“In order to address their needs, and change the culture of policing in this country, we must direct resources to meet those needs in a way that provides alternatives to and diversion from arrest, abuse, and incarceration.”

Scanlon represents several suburbs and some portions of the city. She herself lives outside the city — in suburban Swarthmore, Pennsylvania.

“I’m thankful that she was not physically harmed during this incident, and my thoughts are with her during what I’m sure is a traumatic time,” Kenney said in a statement, according to Fox 29 Philadelphia.

“Everyone deserves to feel safe in our city, and sadly, as we know, that hasn’t always been the case this year. It’s disheartening, and quite frankly infuriating, that criminals feel emboldened to commit such a reckless crime in the middle of the day in what should be a place of tranquility and peace — one of Philadelphia’s beautiful parks.”

I voted YES because police officers must be accountable to the communities they serve. I am committed to curbing police brutality, ending racial profiling, and saving lives. #JusticeInPolicing #BlackLivesMatter https://t.co/4FMR5MVcmh

Crime has made headlines during the pandemic, amid viral videos of smash-and-grab sprees at city stores.

The U.S. saw a spike in murders last year, according to the Justice Department. Philadelphia has struggled especially. Last year, Philadelphia police reported a record-high number of murders to CBS News’ local station.

Kenney himself has voiced concerns about rising violence in the city. He has called for the state legislature to give City Hall more control over firearm regulations.

According to CBS Local, Kenney said in November, “The legislature — not the people behind me — don’t care.”