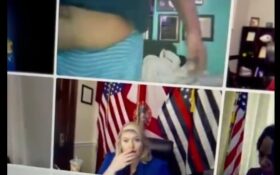 Congress got more than an eyeful during the Congressional Homeland Security Committee meeting on Thursday, which was held online.

Rep. Donald Payne, D-N.J., showed up to the official House of Representatives committee meeting wearing only a t-shirt and underwear, lounging on his bed.

The committee had convened remotely for a question and answer session with Secretary of Homeland Security Alejandro Mayorkas.

And while Rep. Yvette Clarke, D-N.Y., was talking, Payne slowly rolled out of bed – exposing his belly and underwear to the rest of the lawmakers, many of them women.

Republicans on the committee reacted in shock.

“Another reason Democrats should get off Zoom and back to work,” Rep. Beth Van Duyne, R-T.X., wrote. Van Duyne was the first to share the video, which wasn’t broadcast to the public.

“If taxpayers are paying you $174,000 per year, getting out of bed and putting some clothes on for work seems like it should be a minimum requirement,” Rep. Brian Mast, R-F.L. wrote.

You can watch the embarrassing moment here, including Cammack’s stunned reaction —

If taxpayers are paying you $174,000 per year, getting out of bed and putting some clothes on for work seems like it should be a minimum requirement. https://t.co/Sqh6BdZ4W7

Payne issued a statement that danced around the fact that he showed up to Congress undressed.

“As a public servant, my focus has always been the public good and my work to better the lives of my constituents and all Americans, regardless of the circumstances,” his statement said.

Payne’s legislative director complained that Republicans were bullying Payne over his weight.

“It’s no secret that as a diabetic the Congressman has his weight struggles,” Payne’s aide, Sam Morgante, said. “But we try to stick to policy here in Congress.”

All the other lawmakers showed up in formal work attire appropriate for elected officials.