House: Christians being killed in mass genocide - The Horn News 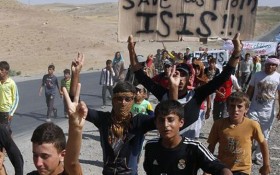 Ratcheting up the pressure on President Barack Obama’s administration, the U.S. House of Representatives yesterday overwhelmingly approved a resolution that condemns as genocide the atrocities committed by the Islamic State group against Christians and other religious and ethnic minorities in Iraq and Syria.

The measure passed by a vote of 393-0, illustrating the heavy bipartisan support for action on Capitol Hill. Secretary of State John Kerry is leaning toward making a genocide determination against the Islamic State and could do so as early as this week, when a congressional deadline for a decision has been set.

But the Obama administration officials have cautioned that a legal review is still under way and said it is likely Kerry will not meet Thursday’s deadline. House Speaker Paul Ryan chided the White House for the anticipated delay.

“As the administration waffles on this issue and doubles-down on its failed strategy to defeat [ISIS], the American people are speaking loudly and clearly on this issue,” the Wisconsin Republican said.

The House resolution identifies the Islamic State’s actions against Christians, Yazidis and other groups, including the Kurds, as “genocide, war crimes and crimes against humanity.”

The resolution was sponsored by Rep. Jeff Fortenberry, R-Neb., who said his congressional district includes the highest concentration of Yazidis in the U.S. Many of them received visas in return for working as translators for American military forces and brought their families with them.

An executive branch determination of genocide, however, would be different from the House measure and fraught with moral and potential legal consequences. It would also mark only the second time a U.S. administration has reached that conclusion while a conflict is ongoing. The first was in 2004 when Secretary of State Colin Powell determined that atrocities being committed in Sudan’s Darfur region constituted genocide.

Powell reached that determination amid much lobbying from human rights groups but only after State Department lawyers advised him that it would not, contrary to legal advice offered to previous administrations, obligate the United States to take action to stop it.

In that case, the lawyers decided that the 1948 U.N. Convention against genocide did not impose a legal obligation on states to prevent genocide from taking place outside of their territory. Powell instead called for the U.N. Security Council to appoint a commission to investigate and take appropriate legal action if it agreed with the genocide determination.

Kerry faces similar issues. Although the United States is already involved in military strikes against the Islamic State and has helped prevent some incidents of ethnic cleansing, notably of Yazidis, some argue that a genocide determination could require additional U.S. action. At the least, a determination would probably be accompanied by a referral to the Security Council for possible prosecution by either the International Criminal Court or some other tribunal that might be set up specifically for Syria and Iraq.

Kerry denied reports that his legal advisers were reluctant to support a determination of genocide but suggested he was not satisfied with their initial opinions.

“I have asked our legal department to evaluate, to re-evaluate actually, several observations that were circulating as part of the vetting process of this issue,” he said, adding that he would act “very, very soon.”

In a bid to push the process, several groups including the Catholic organization Knights of Columbus released reports documenting what they said is clear evidence that the legal standard has been met.

Knights of Columbus chief Carl Anderson applauded the resolution Monday, saying the measure makes clear “that the United States is not afraid to call the horror these innocents have faced by its proper name.”

A 280-page report by the Knights of Columbus identifies by name more than 1,100 Christians who have been killed by Islamic State militants. It also details numerous instances of people kidnapped, raped, sold into slavery and driven from their homes, along with the destruction of churches.