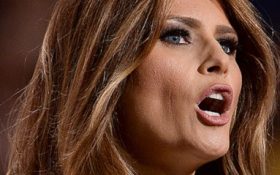 An Oregon congressional candidate is facing a mountain of backlash after publishing a disgusting tweet regarding First Lady Melania Trump.

On Monday, another Twitter user had compared the amount of staff that Melania employs versus with how many staff members former First Lady Michelle Obama had.

Congressional candidate Mark Roberts fired back at the Twitter user saying, “Did you know the First Lady works by the hour? #thinkdirty #hoebag.”

Following Roberts’ disgraceful tweet, another Twitter users pointed out that Melania sued the Daily Mail after they published a story that included unfounded rumors about her and used vulgar language.

I invite that hosebag to sue me.

Instead of backing down, realizing he was wrong, and apologizing, Roberts still carried on. He replied, “I invite that hosebag to sue me.”

When is it ever appropriate to call a classy woman such a derogatory term? Our first lady is nothing but humble, and a great example for younger women.

Following Roberts’ second disturbing tweet, House Majority Leader Kevin McCarthy flagged his tweet to Twitter founder Jack Dorsey. He said, “[email protected] this attack on @FLOTUS is disgraceful. Comments like these have no business on any platform. This account should be banned ASAP.”

.@jack this attack on @FLOTUS is disgraceful. Comments like these have no business on any platform. This account should be banned ASAP. https://t.co/sIGO4ggeAM

Roberts claims to be an “independent conservative,” and revealed he’s “not a fan of the Trump administration.”

Attacking the first lady using vulgar terms is completely despicable, and Roberts deserves any and all backlash he will receive.